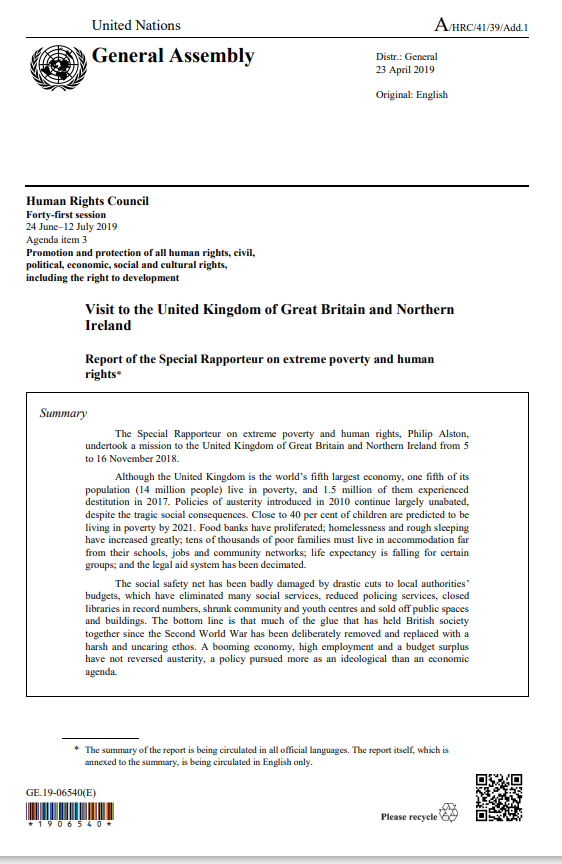 Visit to the United Kingdom of Great Britain and Northern Ireland - Report of the Special Rapporteur on extreme poverty and human rights.

The United Kingdom, the world’s fifth largest economy, is a leading centre of global finance, boasts a “fundamentally strong” economy and currently enjoys record low levels of unemployment. But despite such prosperity, one fifth of its population (14 million people) live in poverty. Four million of those are more than 50 per cent below the poverty line³ and 1.5 million experienced destitution in 2017, unable to afford basic essentials.⁴ Following drastic changes in government economic policy beginning in 2010, the two preceding decades of progress in tackling child and pensioner poverty have begun to unravel and poverty is again on the rise.⁵ Relative child poverty rates are expected to increase by 7 per cent between 2015 and 2021 and overall child poverty rates to reach close to 40 per cent.⁶ For almost one in every two children to be poor in twenty-first century Britain would not just be a disgrace, but a social calamity and an economic disaster rolled into one.
‍

But statistics alone cannot capture the full picture of poverty in the United Kingdom, much of it the direct result of government policies (unless otherwise indicated, “Government” in the present report refers to the United Kingdom Government). Official denials notwithstanding, it is obvious to anyone who opens their eyes. There has been a shocking increase in the number of food banks and major increases in homelessness and rough sleeping; a growing number of homeless families – 24,000 between April and June of 2018 – have been dispatched to live in accommodation far from their schools, jobs and community networks;⁷ life expectancy is falling for certain groups; and the legal aid system has been decimated, thus shutting out large numbers of low-income persons from the once- proud justice system. Government reforms have often denied benefits to people with severe disabilities and pushed them into unsuitable work, single mothers struggling to cope in very difficult circumstances have been left far worse off, care for those with mental illnesses has deteriorated dramatically, and teachers’ real salaries have been slashed.⁸ The number of emergency admissions to hospitals of homeless people (“of no fixed abode”) increased sevenfold between 2008–2009 and 2017–2018.⁹
‍

In the past, the worst casualties of these “reforms” would have received at least minimal protection from the broader social safety net. But austerity policies have deliberately gutted local authorities and thereby effectively eliminated many social services, reduced policing services to skeletal proportions, closed libraries in record numbers, shrunk community and youth centres, and sold off public spaces and buildings including parks and recreation centres. It is hardly surprising that civil society has reported unheard-of levels of loneliness and isolation, prompting the Government to appoint a Minister for Suicide Prevention. The bottom line is that much of the glue that has held British society together since the Second World War has been deliberately removed and replaced with a harsh and uncaring ethos.