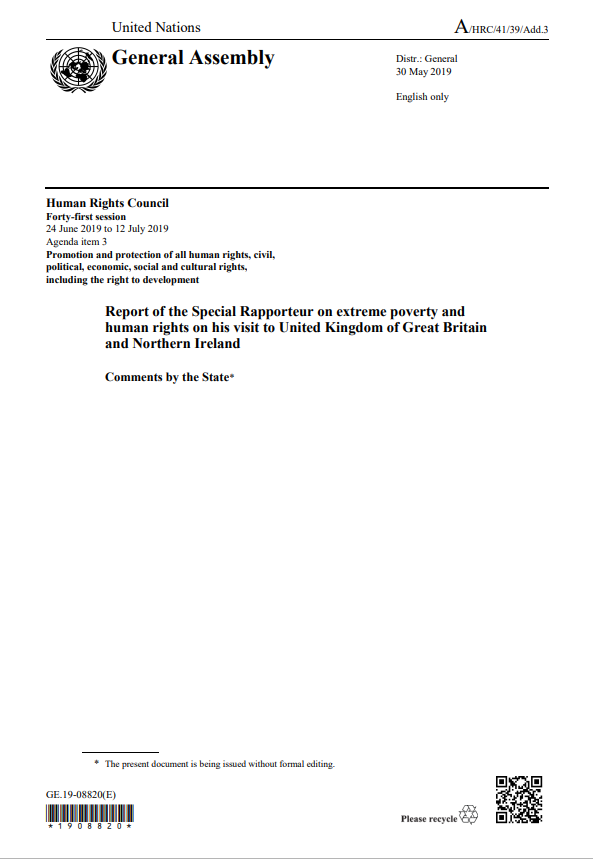 The UK Government thanks the Special Rapporteur on Extreme Poverty and Human Rights for this opportunity to respond to his report on his mission to the UK in November 2018. We are proud of our social safety net, alongside our National Health Service and our world-class education system.
‍


We regret the inflammatory language and overtly political tone of this report, and strongly refute the claim that the design and delivery of welfare reforms, including Universal Credit (UC), are deliberately punitive. We see UC as a much-needed and positive reform, replacing what was a failing system.
‍

Tackling poverty will always be a priority for this government. A sustainable long- term solution needs a strong economy and a benefit system that works with the tax system and the labour market to support employment and higher pay. To help achieve that, we are undertaking the biggest welfare reform programme for a generation. It is working. The employment rate is at a record high (76.1%), and growth in employment rates has overwhelmingly benefitted the poorest 20% of households. Wages are outstripping inflation and rising at their fastest rate in a decade, and our National Living Wage is among the highest in the world.


We have also increased the generosity of benefits in recent years, including:
‍

This Government wants to give everyone the opportunity to succeed rather than being trapped on benefits. Budget 2018 announced a £4.5bn investment that will, make a huge difference to the lives of working families and provide extra support for people moving onto UC. The Spring Statement affirmed that public finances were on a sustainable footing and set out Government’s ambition to end low pay. We remain committed to tackling poverty, making work pay and creating a welfare system that’s fair to all.

1) Visit to the United Kingdom of Great Britain and Northern Ireland - Report of the Special Rapporteur on extreme poverty and human rights.