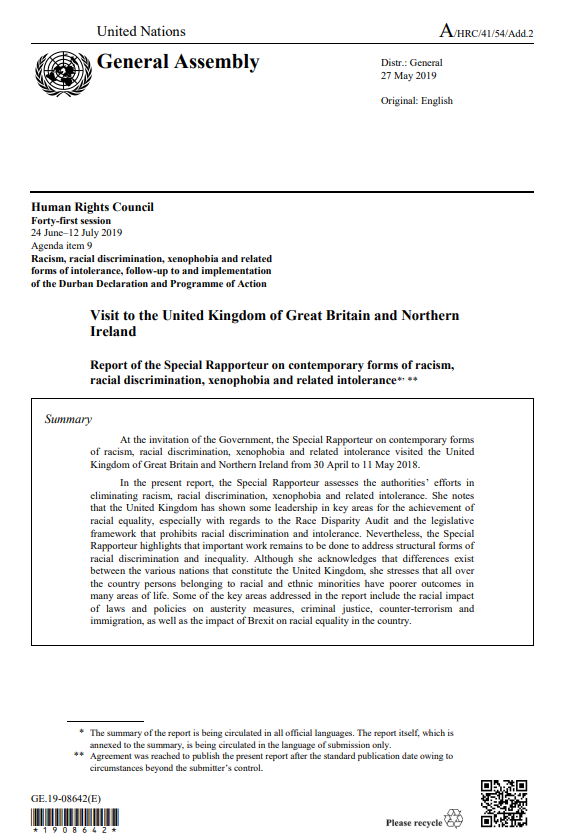 Visit to the United Kingdom of Great Britain and Northern Ireland - Report of the special rapporteur on contemporary forms of racism, racial discrimination, xenophobia and related intolerance

During her visit, the Special Rapporteur travelled to London, Bristol, Birmingham, Cardiff, Edinburgh, Glasgow and Belfast, where she met with representatives of the Government of the United Kingdom, as well as parliamentarians and authorities from the devolved nations of Northern Ireland, Scotland and Wales. She also visited two detention facilities: Harmondsworth Immigration Removal Centre and Her Majesty’s Young Offenders Institution Feltham. The Special Rapporteur is not able to report on her visit to Harmondsworth as the conditions of the visit did not allow for a free and independent inspection. Likewise, the Special Rapporteur did not benefit from direct engagement with the British police or the English and Welsh judiciary despite having requested the Government in advance of her visit to meet with representatives of those bodies.
‍

The Special Rapporteur met with representatives of national human rights institutions and equality bodies, civil society actors, academics, representatives of racial, ethnic and religious minority communities and individuals who had experienced racism, discrimination, xenophobia and related intolerance, including women, youth and children. She extends her deep gratitude to all those who made the time to meet with her and to provide the rich input that informs her analysis.
‍


At the outset of the present report, the Special Rapporteur wishes to highlight that one of the challenges in assessing racial equality in the United Kingdom is the need to harmonize the methods used to collect data, in particular data disaggregated by ethnicity. According to the Government, 87 per cent of people are White and 13 per cent belong to a Black, Asian, mixed or other ethnic group.1 However, racial and ethnic terminology varies even among State institutions, and different terms are sometimes used interchangeably, in potentially confusing ways. For the purposes of the present report, the Special Rapporteur uses the all-encompassing term “racial and ethnic minorities”. However, when referring to documentation provided by external sources, she uses the terminology of the source material so as to avoid misrepresenting their findings. Although the term “Roma” is often used as an all-encompassing term at both the regional and international levels, the Special Rapporteur was informed that “Gypsies, Roma and Travellers” is the preferred terminology used by these communities in the United Kingdom context to reflect the distinct groups represented in the country.

1) Report of the Special rapporteur on contemporary forms of racism, racial discrimination, xenophobia and related intolerance on his visit to the United Kingdom of Great Britain and Northern Ireland - Comments by the State