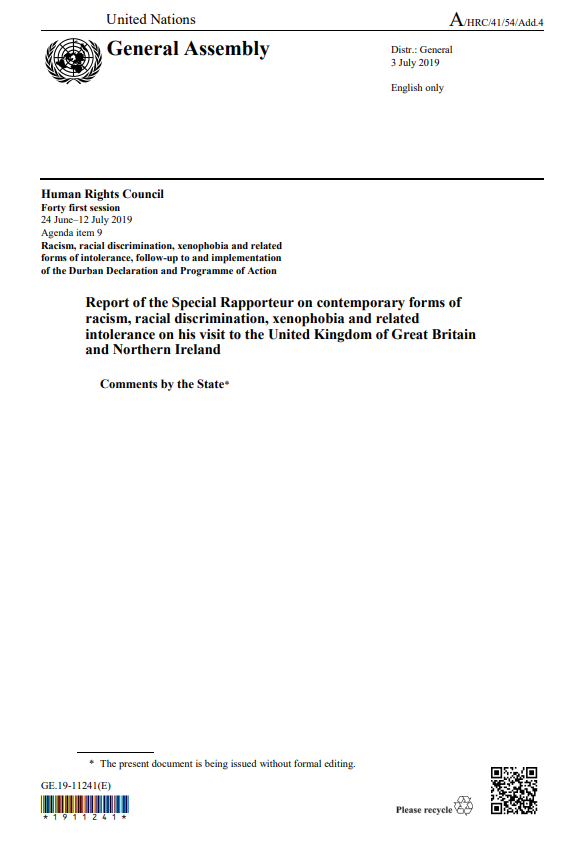 Report of the Special rapporteur on contemporary forms of racism, racial discrimination, xenophobia and related intolerance on his visit to the United Kingdom of Great Britain and Northern Ireland - Comments by the State

We are pleased to see the SR note that the UK Government has shown leadership in key areas regarding the achievement of racial equality, especially within the legislative framework that prohibits racial discrimination and intolerance. During her visit, the SR learnt about various policy documents that are relevant for the promotion of human rights, equality, non-discrimination and tolerance, including the Integrated Communities Action Plan; the Hate Crime Action Plan 2016-2020; the Crown Prosecution Hate Crime Strategy 2017-2020.
‍

We also appreciate the SR’s acknowledgement of the achievement of The Racial Disparity Audit, highlighting its potential to move the UK forward in fulfilling its legal obligations to substantive racial equality under international and domestic law.
‍

We have noted the SR’s recommendations and are pleased to state work that is already taking place on a number of these findings. This includes the publication of a refreshed Hate Crime Action Plan in October 2018 (outlined in recommendation D). Furthermore, in response to the Race Disparity Audit, we have made an announcement to tackle ethnic disparities in the criminal justice system, through Department of Work and Pension (DWP) in challenging areas, through reviews of school exclusions and the Mental Health Act and through support for a £90m fund aimed at tackling youth unemployment (outlined in recommendation H). The Government has also responded comprehensively to the Lammy review (outlined in recommendation N), increasing diversity of new prison officers, funding educations programmes to prepare lawyers from a range of backgrounds, working with police partners to develop deferred prosecution pilots aimed to rehabilitate offenders but still ensure redress from crime. The Government response to a range of the SR’s recommendations is covered in substantive detail in the response below.

1) Visit to the United Kingdom of Great Britain and Northern Ireland - Report of the special rapporteur on contemporary forms of racism, racial discrimination, xenophobia and related intolerance