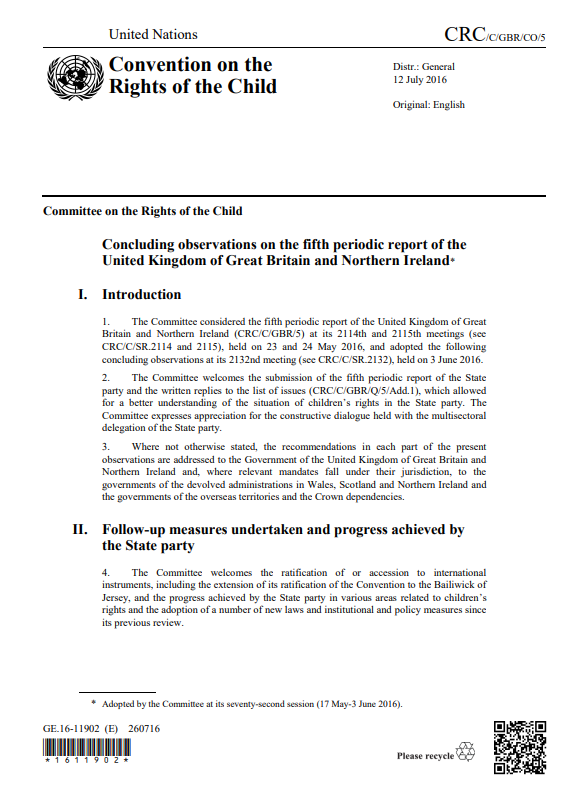 Image © United Nations -Committee on the Rights of the Child

29. The Committee recommends that the State party:

(a) Address underlying determinants of infant and child mortality,

including social and economic deprivation and inequality;

(b) Introduce automatic, independent and public reviews of unexpected death or serious injury involving children, including in custody, care and mental health-care institutions in all the territory of the State party.
‍

Respect for the views of the child

30. The Committee is concerned that:

(a) Children’s views are not systematically heard in policymaking on issues that affect them;

(b) The reforms concerning the reduction of legal aid in all four jurisdictions appear to have a negative impact on the right of children to be heard in judicial and administrative proceedings affecting them;

(c) Youth parliaments have not been established or operationalized in Northern Ireland, Wales, Montserrat, Turks and Caicos or Jersey;

(d) Many children feel that they are not listened to by their social workers, reviewing officers, paid carers, judges, personnel working with children in conflict with the law or other professionals in matters affecting them, including in family proceedings.
‍

31. With reference to its general comment No. 12 (2009) on the right of the child to be heard, the Committee recommends that the State party:

(a) Establish structures for the active and meaningful participation of children and give due weight to their views in designing laws, policies, programmes and services at the local and national levels, including in relation to discrimination, violence, sexual exploitation and abuse, harmful practices, alternative care, sexual and reproductive education, leisure and play. Particular attention should be paid to involving younger children and children in vulnerable situations, such as children with disabilities;

(b) Assess the impact and expedite the review of the reforms on legal aid in England, Wales and Scotland and conduct child rights impact assessment of the proposed reforms in Northern Ireland and Jersey, in order to ensure that such reforms do not negatively affect children’s access to justice, and guarantee effective participation of children in such assessment and review;

(c) Expedite the establishment of youth parliaments in all devolved administrations and territories as permanent forums for children’s effective engagement with national legislative processes on issues that affect them;

(d) Ensure that children are not only heard but also listened to and their views given due weight by all professionals working with children.
‍

32. The Committee notes increasing demands from children for a right to vote from the age of 16 years and that, in Scotland, voting age has been extended to 16 and 17 year olds for local and Scottish Parliament elections.
‍

33. The Committee encourages the State party and devolved administrations to conduct consultations with children on the voting age. Should the voting age be lowered, the Committee recommends that the State party ensure that it is supported by active citizenship and human rights education in order to ensure early awareness of children that rights are to be exercised as part of citizenship, with autonomy and responsibility, and that the measure does not lend itself to undue influence.