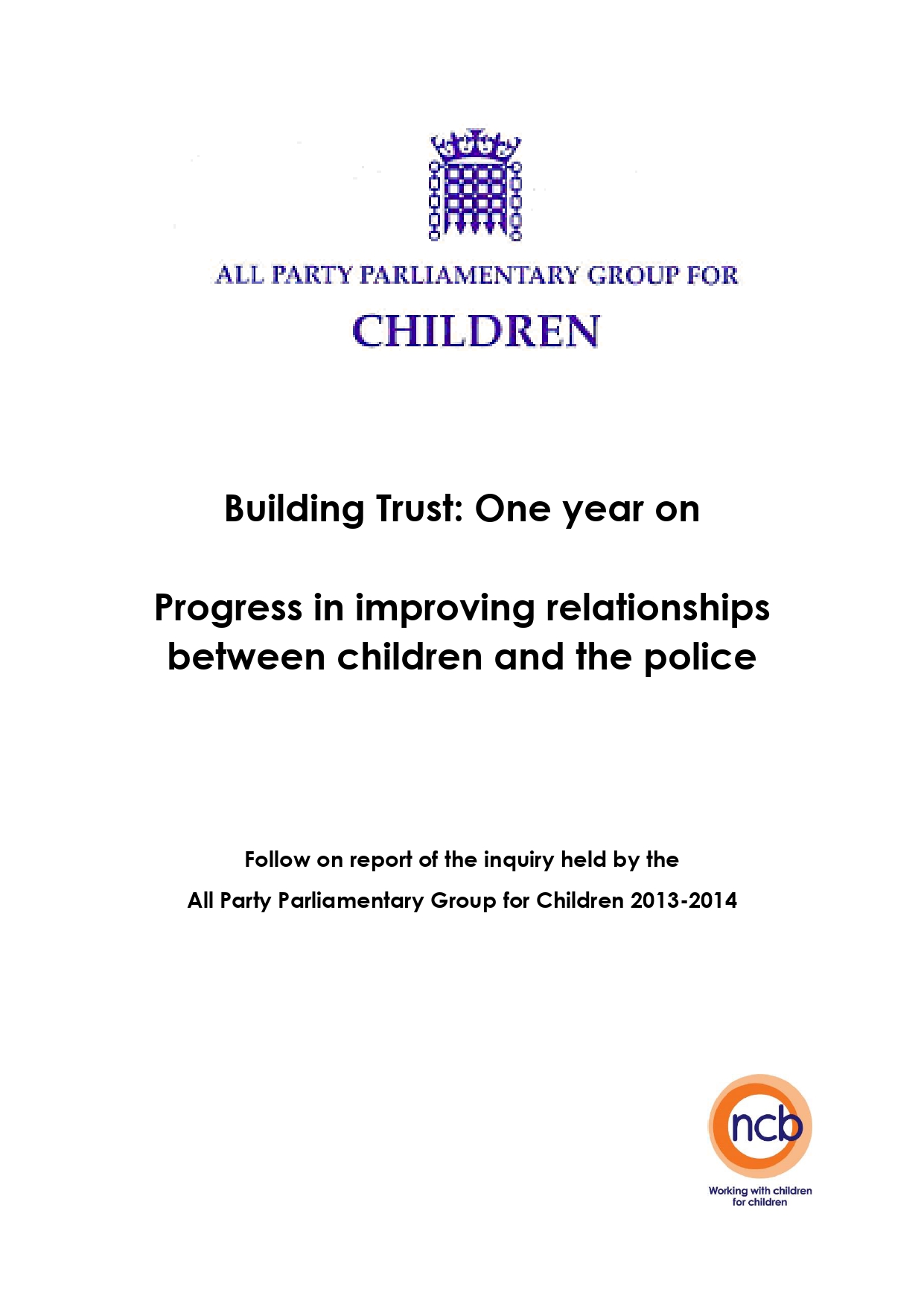 All Party Parliamentary Group for Children Building Trust: One Year on - Progress in improving relationships between children and the police

Since the publication of the All Party Parliamentary Group for Children's final inquiry report – It's All About Trust: building good relationships between children and the police – in October 2014, significant progress has been made towards strengthening the policy and legislative framework that governs police forces' work with children and young people. These measures, which are being supported by a new National Strategy for the Policing of Children and Young People1, are underpinning the development of a more child-centred approach to policing. However, more still needs to be done to ensure that every person under the age of 18 is treated as a child first and foremost during all interactions with the police, and to reduce the unnecessary prosecution of children and young people.‍

Progress since the APPGC's inquiry report

The new National Strategy for the Policing of Children and Young People, published by the National Policy Chiefs' Council (NPCC) and launched in July 2015, mirrors the key priorities of the APPGC inquiry, focusing on: stop and search; children in care; detention in police custody; and the relationship between children and the police. This will underpin the work of the NPCC to reform policing practice for the benefit of children and young people. The review of the youth justice system2, reporting in summer 2016 and led by Charlie Taylor for the Ministry of Justice, should provide an opportunity for further analysis and reform of the work of the police with vulnerable children.

The inquiry sought substantial changes to the legislative framework that governs police practice, to ensure that all children and young people under the age of 18 have their rights promoted and needs met in accordance with the United Nations Convention on the Rights of the Child. Inquiry recommendations that have been implemented include:
‍

During the inquiry, many organisations presented examples of programmes and interventions that build positive relationships between children and the police, but there was also evidence of a gap in the effective sharing of practice examples across the country and in training for police officers on understanding children's behaviour and identifying vulnerabilities. Policing and criminal justice bodies have now been working to incorporate exemplars into training materials, are reviewing training on issues such as stop and search, care of children and child protection, and are developing a knowledge hub for professionals. The APPGC recommends that the NPCC, in partnership with the College of Policing, explore the potential for expanding the role of existing 'what works' centres and resource banks to include the evaluation and validation of practice examples. The College of Policing should consult with existing children and young people's advisory groups to ensure that the participation of young people further informs the development of the policing curriculum and professional development.‍

The inquiry heard that some groups of children and young people are at particular risk of being brought into the youth justice system, with children in care being a prime example. Currently, in many areas, police are often called to deal with incidents in children's homes and these incidents must be formally recorded, as stipulated by the National Crime Recording Standards and Home Office Counting Rules. As a result, formal action can be taken for minor incidents which would ordinarily be dealt with by parents in a family home, leaving children in care with a criminal record unnecessarily. The APPGC repeats its recommendations that the Home Office endorse the adoption of a national protocol to reduce the prosecution of children in care, and bring National Crime Recording Standards and Home Office Counting Rules for children's homes in line with those for schools. In addition, the review of residential care, led by Sir Martin Narey, should consider the management of incidents in children's homes and make recommendations for improving arrangements so that police are not called unnecessarily.‍

Since the publication of the APPGC's inquiry report, further evidence has come to the attention of the Group, which shows that the drive for crime recording integrity is needlessly drawing other children and young people into the criminal justice system, impacting on their long-term welfare and future career opportunities. The APPGC recommends that the Home Office review Home Office Counting Rules and develop a new outcome, which allows police forces to record low-level crime-related behaviour in a way that would allow for the child's behaviour to be addressed by a welfare agency without forming part of a young person's criminal record or being disclosed within an enhanced Disclosure and Barring Service check.

The inquiry found that children and young people are not being transferred from police custody to local authority accommodation post-charge if bail had been refused, a legal requirement under the Police and Criminal Evidence Act 1984. This means that many young people in police cells overnight with implications for their welfare. The Home Office has now convened a working group to bring together agencies with responsibility for transfer arrangements in order to identify and address the challenges underlying the inability of some police forces and local authorities to fulfil their legal obligations. A concordat agreement setting out key actions for government and partner agencies is expected to be published in early 2016. The APPGC urges the Home Office to ensure that the concordat is published as soon as possible and to review its impact on numbers of children held in police custody overnight, after one year. In addition, the APPGC recommends that the Home Office require all police forces to provide regular data returns on children held in custody and transferred, and extend the duty to transfer to children charged for breach of bail.

Witnesses to the APPGC inquiry identified the long-term benefits for children and young people of developing positive relationships with the police in the local community. The APPGC has been disappointed to see that police forces are cutting back on school- based police officers due to reduced budgets and a lack of clear policy steer from the Home Office on the Safer Schools Partnership. Police engagement within the school can provide a supportive environment within which to tackle serious issues facing vulnerable children and young people, such as maltreatment, abuse and child sexual exploitation – all of which are high on the government's agenda. The APPGC recommends that the Home Office and NPCC should work together to develop a sustainable Safer Schools Partnership programme, which recognises the value of this work in building positive relationships between children and the police.

The Ministry of Justice review of the youth justice system, led by Charlie Taylor, will place a welcome focus on a number of the issues highlighted in this report. The APPGC urges the Ministry of Justice, through this review, to consider in particular the recommendations relating to: reducing the unnecessary criminalisation of young people, and particularly looked after children; investment in the Safer Schools Partnership programme; and preventing children being held in police custody overnight.

‍
1) “It’s all about trust”: Building good relationships between children and the police