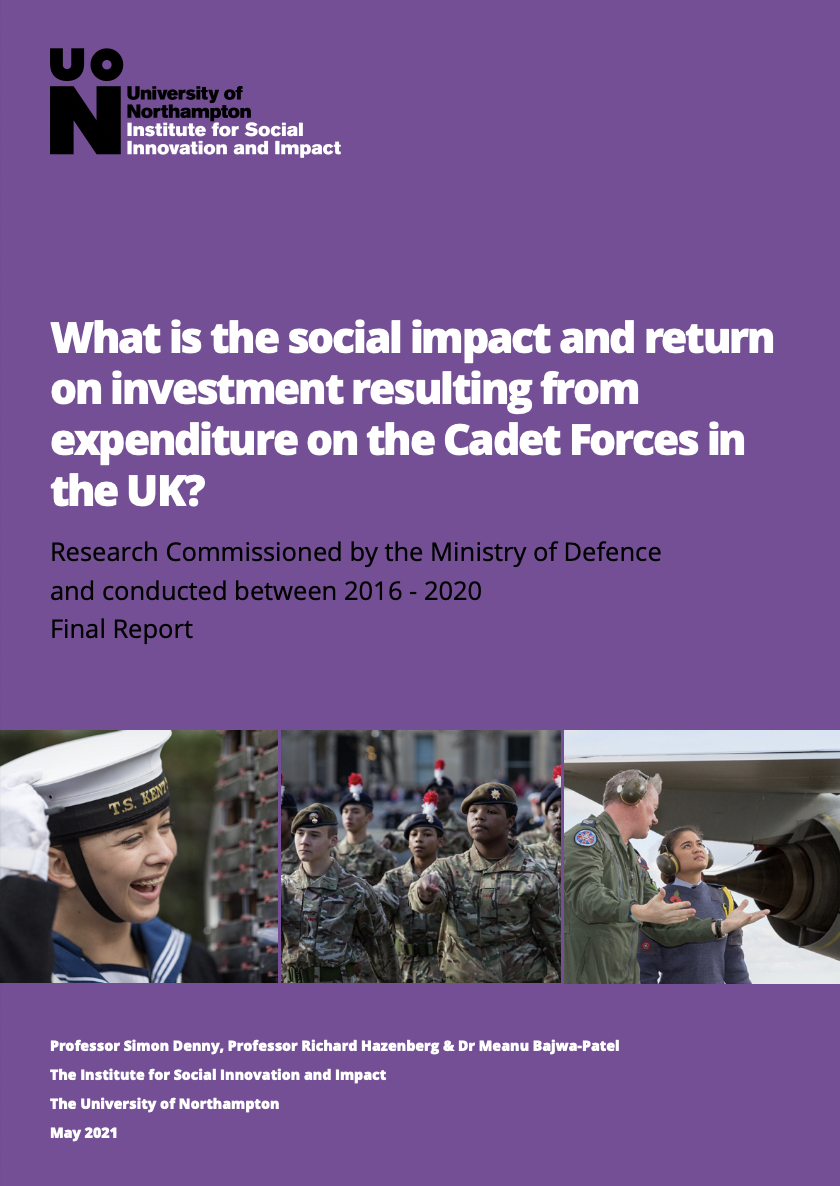 Image © University of Northampton Institute for Social Innovation and Impact

The key finding of this research project is that participation in the Cadet Forces has particularly significant positive impacts on young people, particularly those that suffer economic and other disadvantages. This finding relates to the concept of self-efficacy. The structured questionnaire was used to gather data on levels of self-efficacy from over 5,500 cadets, with over 1,000 cadets completing the survey on more than one occasion, thus providing some longitudinal measure.

‍Self-efficacy refers to an individual’s belief in his or her capacity to execute behaviours necessary to produce specific performance attainments (Bandura 1986¹); whilst it has been related to confidence, motivation and self-esteem². Self-efficacy reflects confidence in the ability to exert control over one’s own motivation, behaviour, and social environment. These cognitive self-evaluations influence all manner of human experience, including the goals for which people strive, the amount of energy expended toward goal achievement, and likelihood of attaining particular levels of behavioural performance.

Self-efficacy is an important concept as it is significantly correlated with school-related and work- related performance and motivation. As noted above, young people in the UK eligible for Free School Meals (eFSM) score lower on measures of self-efficacy. Data gathered by this study through the questionnaire, and data gathered by some Cadet Force units show that a significant minority (c. 10%) of cadets are eFSM; in some areas of the country the number of cadets that are eFSM rises to over 30%. Therefore, it would be expected that these cadets would have lower levels of self-efficacy than their peers. However, our longitudinal data showed no statistically significant differences between eFSM cadets and non-eFSM cadets. This is a very interesting finding that leads to the hypothesis that cadets that are eFSM have improved self-efficacy because of the activities they undertake in the Cadet Forces. The implications of this finding are important for policy makers. Given that higher levels of self-efficacy are correlated with being more resilient, doing better at school and gaining employment; it is very possible that being a cadet is, for a young person from an economically disadvantaged background, a key factor that can enable them to become a positive contributor to society, economically and socially.

Interestingly, when the results of a survey of 353 CFAVs were analysed in detail, 97% of those who were currently working as teachers, social workers
or members of the police force (i.e. a sub-set of respondents that work with large numbers of children, n = 34) believe that participation in the Cadet Forces is particularly beneficial for disadvantaged youngsters.

Self-efficacy is associated with improved motivation and performance at school³. Even moderate improvements in GCSE attainment can lead tosignificant increases in economic benefits to society. As noted above, c. 70% of eFSM children do not meet expected standards at age 16. Moreover, children that are eFSM are four times more likely to be excluded from school than their non-eFSM peers, and being excluded from school often leads to a young person failing to be employed, to be in further or higher education, or to be in training⁴. If being a cadet means that a young person who is eFSM has improved life outcomes compared with a child that is eFSM who is not a cadet, then the implications for the cadet’s social mobility are profound. The research team conclude that the work being done by the CFAVs to help children from economically disadvantaged backgrounds to attain the same levels of self-efficacy as their more affluent peers, is of great importance, not least to the UK taxpayer.

Analysis of the very large amount of data gathered from cadets, CFAVs, teachers, parents, and employers has identified that participation in the Cadet Forces develops a number of key attributes in the young people who have been cadets for at least 12 months¹. These key attributes are:

As a result of developing and deploying these key attributes, young people experience a number of positive outcomes which this research project has identified as including²:

We suggest that these outcomes demonstrate that the Cadet Forces are delivering significant corporate social responsibility, particularly through the enhanced employability of cadets and CFAVs. The impacts and return on investment of these outcomes will be explored later in this report.

¹ The Cadet Vocational Qualification Organisation (CVQO) is an education charity, providing vocational qualifications to youth group members and the adult volunteers who devote their time to running them, see https://cvqo.org/.
‍
² Judge, T. A., Locke, E. A. and Durham, C. C. (1997). The dispositional causes of job satisfaction: a core evaluation approach. Research in organisational behaviour, 19: 151-188; Bandura, A. (1986) The explanatory and predictive scope of self-efficacy theory, Journal of Social and Clinical Psychology, 4:3, pp. 359 – 373.
‍
³ Zimmerman, B. (1995). Self-efficacy and educational development. In A. Bandura (Ed.), Self-Efficacy in Changing Societies (pp. 202-231). Cambridge: Cambridge University Press; Meyers, R. and Houssemand, C. (2010) Socio-professional and Psychological Variables that Predict Job Finding, Revue Européanne de Psychologie Appliqué, 60:201–219.
‍
⁴ In the study we use eligibility for Free School Meals as a proxy for economic disadvantage.