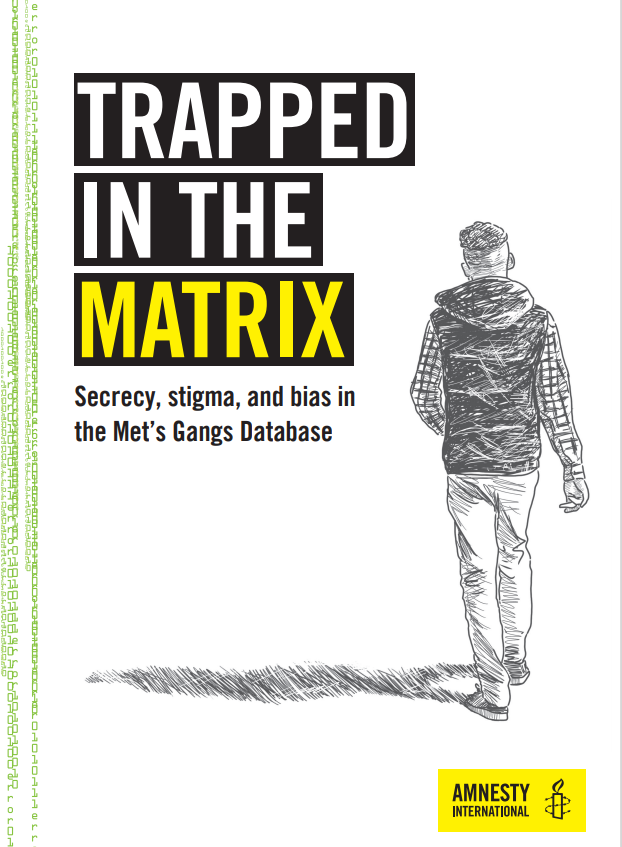 Trapped in the Matrix - Secrecy, stigma, and bias in the Met's Gangs database

Our research shows that the Gangs Matrix is based on a vague and ill-defined concept of ‘the gang’ that has little objective meaning and is applied inconsistently in different London boroughs. The Matrix itself and the process for adding individuals to it, assigning ‘risk scores’ and sharing data with partner agencies appears to be similarly ill-define with few, if any, safeguards and little oversight.
‍

Not only does this data collection amount to an interference with young people’s rights, but the consequences could be serious for those labelled as ‘gang nominals’, more than three-quarters of whom are black boys and young men. Data sharing between the police and other government agencies means that this stigmatising ‘red flag’ can follow people in their interaction with service providers, from housing to education, to job centres. It is important to examine the impact this has on their rights. We believe further investigation by the appropriate authorities – the Information Commissioner’s Office, the Mayor’s Office for Policing and Crime, and the Metropolitan Police – is necessary to ensure the rights of these young people are respected.

• While it purports to be a risk management tool focused on preventing serious violence, 40 percent of people listed on the matrix have no record of involvement in any violent offence in the past two years and 35 per cent have never committed any ‘serious offence’.
‍

• The concepts of the ‘gang’ and ‘gang member’ are vague and ill-defined, and the process for adding people to the matrix or removing them from it appears to lack clear parameters, thresholds and criteria; this leads to over-broad and arbitrary identification of people as gang members.
‍

• Many of the indicators used by the Metropolitan Police to identify ‘gang members’ simply reflect elements of urban youth culture and identity that have nothing to do with serious crime. This conflation of elements of urban youth culture with violent o ending is heavily racialised. The result is that the matrix has taken on the form of digital pro ling; 78 per cent of individuals on the Gangs Matrix are black, a number which is disproportionate both to the black population of London (13 per cent of the whole) and the percentage of black people among those identified by the police as responsible for serious youth violence in London (27 per cent). ‘Youth violence’ refers to violent offences against people below the age of 20.
‍

• There are no clear processes for reviewing the matrix, or for correcting or deleting outdated information. There is no formal process to notify individuals that they are on the matrix and no official system through which they can challenge their inclusion or have their named removed.
‍

• Data sharing between the police, housing associations, schools, job centres, the criminal justice system and the Home Office appears to lack safeguards; there is therefore a risk that these services will discriminate against already marginalised young people, with disproportionate impact on black boys and young men. Community activists, young people and family members all told Amnesty International that they felt the Gangs Matrix unfairly pro led and stigmatised black youth, further entrenching distrust in the police and isolating at-risk individuals.