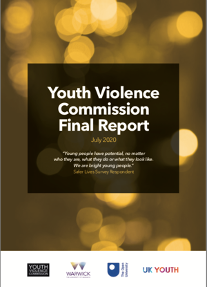 The Youth Violence Commission was established with the recognition that tackling youth violence is the responsibility of all society. The commissioners are therefore comprised of MPs from across different political parties, in order to seek a genuine cross party consensus on solutions to address youth violence. The commissioners will be working alongside the commission’s academic and strategic partners to seek evidence based policy solutions, with the aim of ultimately getting each political party to sign up to the final report’s recommendations before the next General Election.

The Commission is supported by a joint collaboration of academics from The Open University and Warwick Policy Lab of Warwick in London, which is part of the University of Warwick. Our academic partners have conducted a range of primary research to support the Commission’s work. This has included developing and conducting a national survey of young people to find out about their experiences and views of violence, supporting a series of expert evidence sessions in Portcullis House, and gathering evidence from meetings with senior personnel in the Scottish Violence Reduction Unit. In addition to gathering data through primary research, our academics have reviewed the most relevant and recent studies on the subject of serious youth violence, and authored our interim and final reports that present the Commission’s key findings and policy recommendations.

The Youth Violence Commission published its detailed final report into Youth Violence in July 2020.  Its executive Summary contains these words.  The report itself is essential reading for anyone who wishes to engage in supporting young people, and understanding some of the social causes behind crimes of violence to which any of us can be victims. The Youth Violence Commission is chaired by MP Vicky Foxcroft and supported by a cross-party group of MPs. Its final report is the result of a joint collaboration between academics from the University of Warwick and The Open University. The Secretariat for the Commission is UK Youth. Many other groups and individuals have supported the Commission, details of whom can be found in Appendix A and B to the full report.

“Serious violence has a devastating impact on the lives of countless young people across the UK, leaving deep and enduring scars on the families, friends and communities affected. While the magnitude of the effort needed to protect young people from serious violence cannot be underestimated, we believe there is cause for cautious optimism. In recent years, among the vast majority of the individuals and groups with whom the Youth Violence Commission (YVC) has had the privilege of engaging, there has been nothing short of a sea-change in the way serious violence is being understood and talked about.”

Many readers will be all too familiar with the narrative that has increasingly dominated discussions among those working to reduce serious violence: the ‘public health approach’. For the YVC, these are not empty words. This shift in understanding opens up huge potential for fundamental change in the way we understand and respond to serious violence.

The evidence provided to the Commission over the last three years has often forced us to switch our focus, from the violence perpetrated by young people, to the shocking levels of serious violence and mistreatment inflicted on these same young people throughout their lives.

Far too many young people have seen their own friends stabbed to death. Others have had to endure the crushing experience of seeing their own mothers being brutally and repeatedly attacked in their homes or have been the victims of domestic violence themselves. In addition, many grow up surrounded by stark levels of deprivation, insecurity and adverse early-life experiences that have left them suffering from severe trauma, which too often goes overlooked and unaddressed.

Their recommendations are as follows:

The Commission welcomes the Government’s decision to support and invest in regional Violence Reduction Units (VRUs). Our utmost concern is that the recently established VRUs are given the best possible opportunity to succeed in bringing together and implementing genuine, holistic, public health approaches to reducing serious violence. To this end, the Commission’s central recommendations are as follows:

We hope that the YVC’s findings and recommendations will provide welcome support to each of the regional VRUs in their task of driving forward genuine public health approaches to reducing serious violence. While the size of this task should not be underestimated, it is one we are confident can be met, provided that the political will exists to drive forward the Commission’s recommendations.