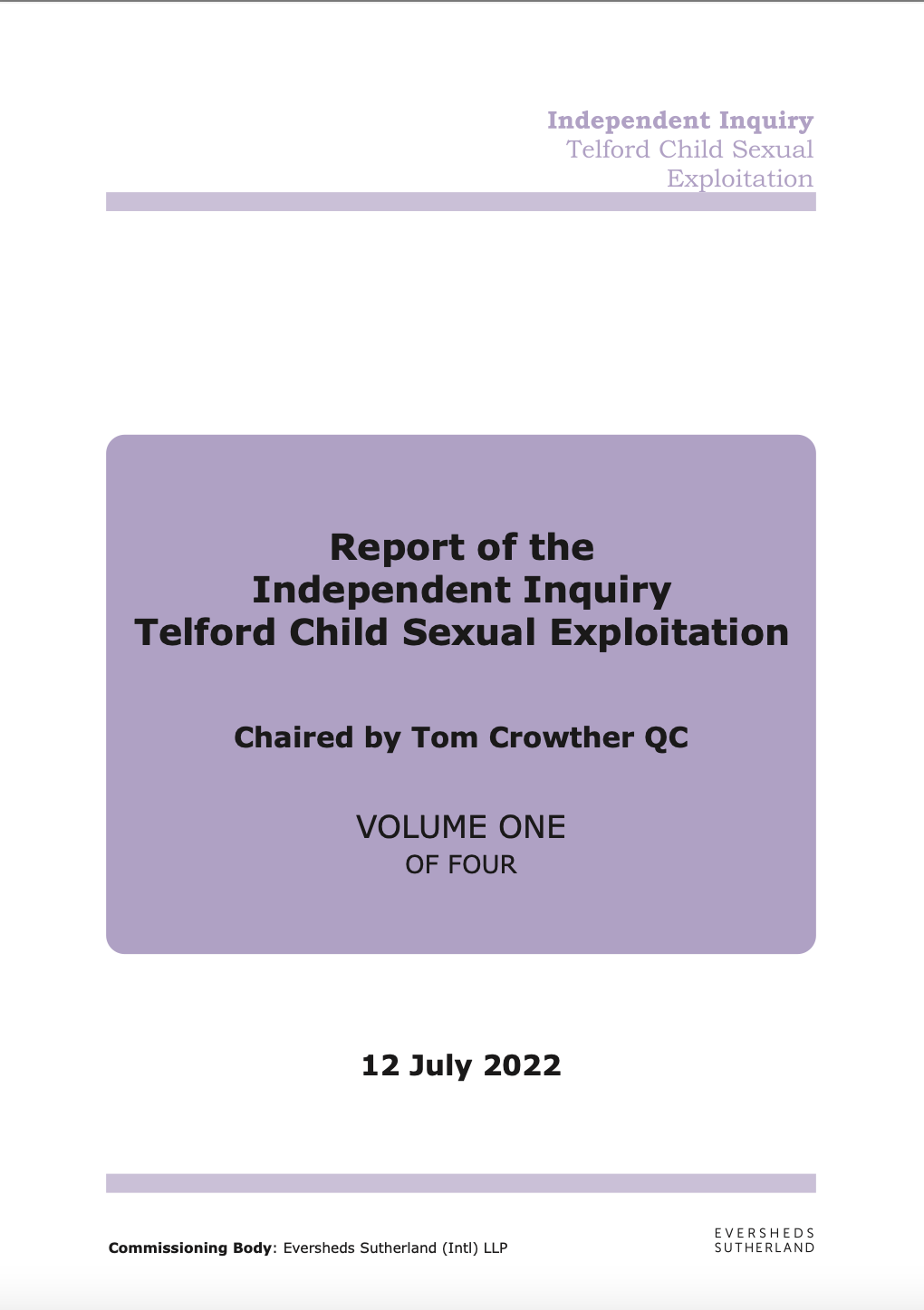 The Report of the Independent Inquiry - Telford Child Sexual Exploitation

Rather than to  summarise a report too shortly running to 4 volumes, and fail to do it justice, FKCL repeats this reflection from the Chairman of the Inquiry,  Tom Crowther QC. Published first on LinkedIn on 29th July 2002, his words speak for themselves. The fuller Executive Summary, and the whole report may be accessed via the link below.

Tom Crowther QC, Chairman of the Inquiry wrote this:

“Two weeks after the publication of the report of the Independent Inquiry on Telford Child Sexual Exploitation, I have had chance to reflect on its reception and the response. I spent publication day with members of the Survivors’ Committee, presenting the report in some detail with Sarah Jones, Isabelle Mitchell, Catherine Henney, and Gina Margaroni from Eversheds Sutherland; we were gratified to see entirely positive reactions to my conclusions and recommendations. Subsequently, key stakeholders have apologised for past failings and committed to implementing the recommendations I made.

I was interested to see a narrative develop in the subsequent media coverage that exploited children “came from challenging backgrounds… and that there was prejudice against them”. I pushed back against that in the interviews I did, because it is false; the evidence I saw, which is faithfully recorded in the report, is that children from “challenging backgrounds” were more likely to have been on the radar of the Council’s Safeguarding team than those from “good homes”, and more likely to have had some official intervention – though that intervention was often inadequate and misdirected. Further, frustrated and utterly committed parents were instrumental in pushing the police to set up the Operation Chalice investigation in the mid 2000s. Yet the false narrative endured through reporting of the Inquiry’s findings.

It would be dangerous if the 1990s/2000s view that only children on the margins could be exploited were to take hold in Telford, or in other towns. If the scale of a problem is not understood the response cannot be adequate. That shows, in my view, the sense of my overarching recommendations; that key stakeholders and their specialist child exploitation teams send data to a Joint CSE Review Group and publish an annual report. That report should set out incidence, trends and key statistics including, crucially, mapping information. This will allow the community in Telford and at large to determine whether CSE is indeed a problem for areas of deprivation alone, or for the whole town; and I consider that this approach could form the basis of regional and ultimately national reporting structures. As long as people can say “it couldn’t happen here” there is no impetus to create a response; but data – hard facts – tell the community the truth about itself, and lets the community decide.”