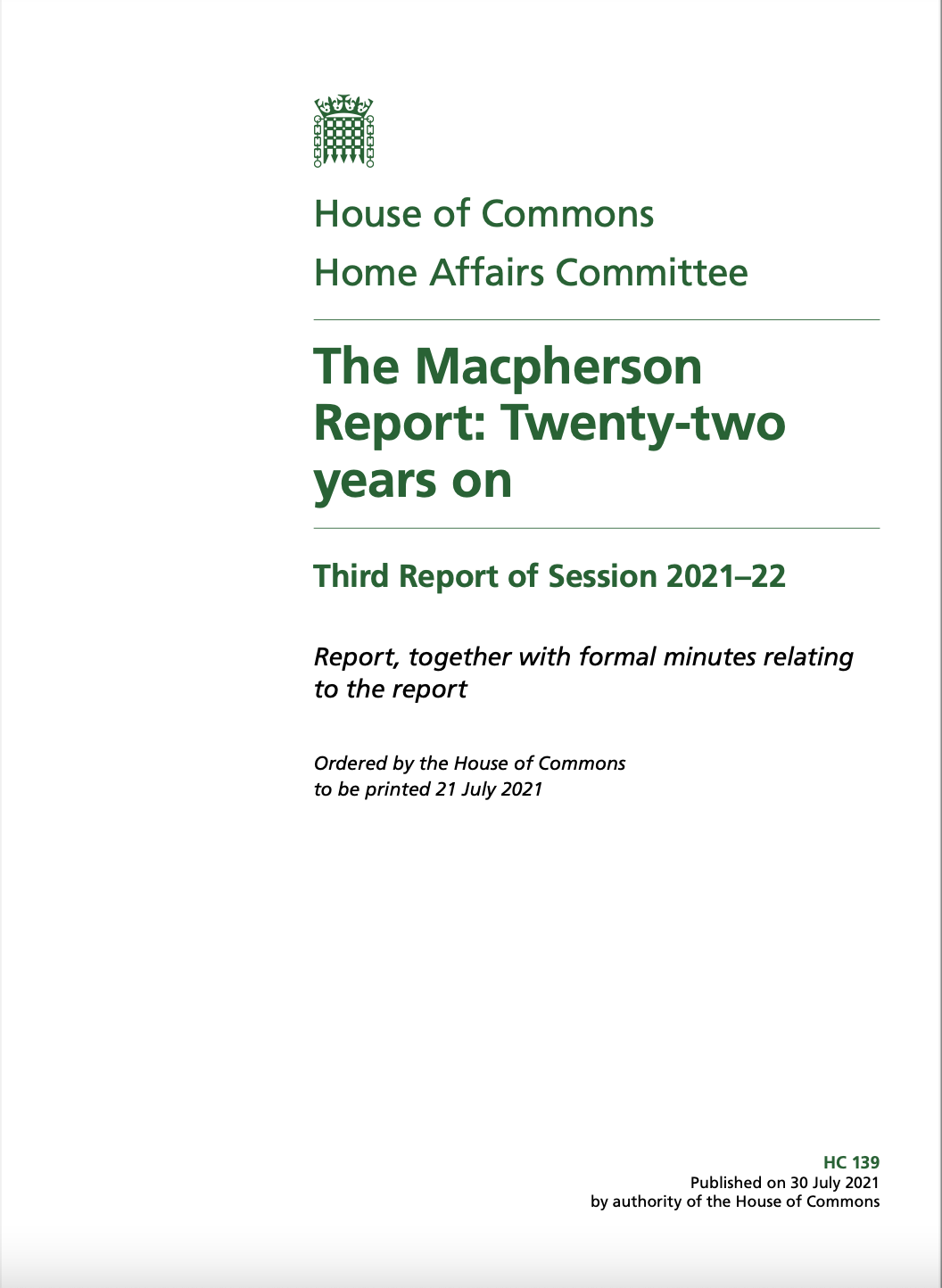 The Macpherson Report: Twenty-two years on

We have found that policing today is very different from twenty-two years ago. Since the Macpherson report was published there have been important improvements in policing including significant improvements in the policing of racist crimes, in the commitments made to promoting equality and diversity and in good examples of local community policing. But our inquiry has also identified persistent, deep rooted and unjustified racial disparities in key areas including a confidence gap for BME communities, lack of progress on BME recruitment, problems in misconduct proceedings and unjustified racial disparities in stop and search. In those areas, we propose urgent action.
‍

The Macpherson report called for it to be a Ministerial Priority that all police services “increase trust and confidence in policing amongst minority ethnic communities.” However, twenty-two years on, evidence to our inquiry shows that there is a significant problem with confidence in the police within Black communities, particularly among young people.
‍

Adults from Black and mixed ethnic backgrounds are less likely to have confidence in the police than adults from White or Asian backgrounds, and the confidence gap has widened over the last few years. 67% of White adults say they believe the police will treat them fairly compared to 56% of Black adults. All victims of crime should feel confident in turning to the police for help. That Black people have much lower expectations than White people that they will be treated fairly and with respect by the police is a matter of deep and serious concern.
‍

Our inquiry has found a lack of proper local or national plans to tackle the confidence gap, and we found that increasing trust and confidence in policing is not being treated as a policing priority or a Ministerial priority today. The Committee calls for new plans from police forces and the Home Office to increase confidence among BME communities, regular gathering and publishing of confidence data and information for all forces, and inspections on progress.

Stephen Lawrence, his family and Stephen’s friend Duwayne Brooks were all victims of a racist crime. The Macpherson report was highly critical of the way they were treated and the failure of policing to monitor, understand or investigate racist crimes properly. The recommendations brought about a transformation in the way police recognise racist incidents and deal with racist crimes which is one of the most important legacies of the Stephen Lawrence Inquiry. We welcome the changes that were made and found a strong commitment from senior police officers to maintain that progress.
‍

However, racial hatred remains a significant problem in society, more than 75,000 race related incidents were recorded by the police in England and Wales in 2019/20. We are deeply concerned that victims of hate crime are less likely to be satisfied with the outcome of a police investigation than they are in other crimes, and that some Black men and women still report that they have been treated as suspects not victims of crime. The Committee calls for better recording of hate crime offences, including disaggregating race hate crime, as well as work between the Home Office, NPCC and Victims Commissioner to improve support for BME victims of crime.
‍

Going forward we are concerned that the Government and police forces are being left behind by the rise of online racism and racist crimes. Whilst we welcome the proposed Online Safety Bill, we call for a new Home Office and NPCC strategy for policing hate crime online including urgently needed skills, training and digital infrastructure.

Recruitment and progression of BME officers and staff
‍

The Macpherson report recommended that police forces should be representative of the communities they serve, and that targets should be set for recruitment, progression and retention of minority ethnic police officers. But the ten-year targets set by the then Home Secretary, including overall minority ethnic representation of 7% in the service by 2009, were not met. Even by 2020, BME officers represented just 7% of the police service across England and Wales, still far below the 14% of the population in England and Wales who identify as BME. Levels of under representation are most marked among senior ranks: only 4% of officers at or above the rank of chief inspector are from BME backgrounds.
‍

It is extremely disappointing that twenty-two years after the publication of the Macpherson report the police service is still a very long way from being representative of the diverse communities it serves. The Peel principles that have underpinned British policing for nearly 200 years are based on the understanding that the police are the public and the public are the police. These principles apply to everyone: it cannot be the case that they apply to some communities and not others based on the colour of people’s skin.
‍

Our inquiry found police forces across the country have failed to do enough to increase BME recruitment, retention and promotion for decades. There has been a lack of focus, consistency and leadership in driving BME recruitment and promotion in the police service for far too long. Our analysis suggests that, on the current rate of progress, we will not have properly representative police forces in England and Wales for another twenty years. That would be four decades after the Macpherson report raised the seriousness of this issue and nearly half a century after the murder of Stephen Lawrence.
‍

We agree with the Home Secretary that the Government’s commitment to recruit an additional 20,000 police officers must be used to make immediate and significant progress in tackling the persistent underrepresentation of BME communities within police forces. We found that some forces are making significant progress in increasing BME recruits, notably Nottinghamshire and Greater Manchester, using positive action such as targeted recruitment campaigns, youth engagement and outreach, and working with local community and faith leaders. However, we found that the vast majority of forces are still failing to recruit BME officers in proportion to their local population.
‍

We recommend that the Government agrees minimum targets for the recruitment of BME officers with each constabulary reflecting the respective composition of its local population, in order to achieve at least 14% of officers nationally by 2030. Evidence from forces which use positive action demonstrates that forces should be able to achieve these targets using tried and tested measures. A national strategy should be drawn up by the National Policing Board with a clear timeline, a requirement on chief officers to use positive action, rigorous scrutiny on progress and remedial measures for failure to achieve these targets. It should include a new framework for inspections, and accountability and follow up action using the Home Secretary’s statutory powers if targets are not being met. The Home Office should work with the Law Commission on further measures which might be considered where forces can show that tried and tested positive action is not able to address historic underrepresentation.

In the year to 31 March 2020, Black people were over nine and a half times more likely to be stopped and searched than White people. Despite the serious concerns raised and recommendations made in the Macpherson report and other reports since, the disproportionality is greater now than it was twenty-two years ago. We agree with HMICFRS that these disparities have damaged confidence in stop and search itself and undermined the legitimacy of policing for the BME communities most affected by it.
‍

Stop and search is an important police power and the Macpherson report’s conclusion that it has a useful role to play in the prevention and detection of crime still applies. However, no evidence to this inquiry has adequately explained or justified the nature and scale of the disproportionality in the use of stop and search powers. This is especially the case for searches for the possession of drugs where evidence shows that Black people are less likely than White people to have used drugs in the last year, but are 2.4 times more likely to be stopped and searched for drug possession. We recognise the importance of the police being able to take action against knife crime including through stop and search but note that only 16% of ‘reasonable grounds’ searches in 2019/20 were conducted to find offensive weapons.
‍

We also heard troubling examples of stops and searches being conducted in a manner that was deeply alienating and uncomfortable, including from the IOPC. Given that the majority of people stopped and searched are not found to be committing any crime, stops should be initiated in a respectful and appropriate manner, with care taken to manage conflict and de-escalate encounters where necessary.
‍

Stop and search must always be used in a focused and targeted way. The Metropolitan Police increased their use of stop and search during the first national covid-19 lockdown to the highest levels seen in London for many years at a time when far fewer people were on the streets. They were wrong to do so: the result was that far more people who were not committing crimes were stopped and searched, the proportion of searches which found weapons or drugs dropped, and the racial disparity widened. It should never have been possible for the equivalent of 1 in 4 Black males between the ages of 15 and 24 in London who were not committing a crime to be stopped and searched during a three-month period.
‍

Sensible recommendations from HMICFRS on stop and search from four years ago have still not been widely implemented or sustained. That needs to change urgently. The Committee is also calling for further reforms, including recording the ethnicity of those who are subject to road traffic stops, additional training for police officers and staff on communication, conflict management and de-escalation, and full use of body worn video, with internal reviews and external community oversight, both to build confidence and to ensure improvements are made.
‍