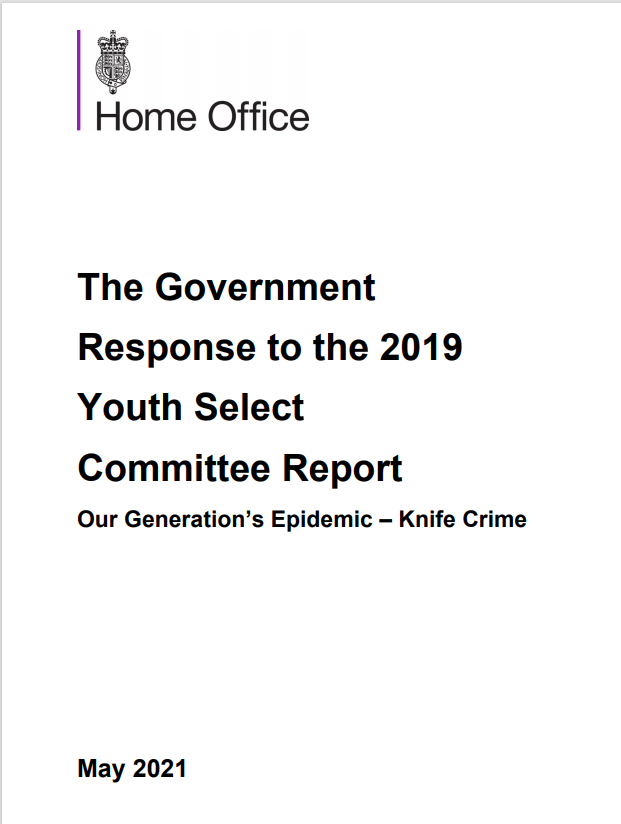 Knife crime has devastating consequences for victims, families and communities across our country. We know this is an issue of huge importance, particularly for younger people, and I am extremely grateful to the Committee for its thorough and thoughtful report.
‍

Keeping the public safe is a key priority for this Government. That is why we are taking concrete action to boost law enforcement, dismantle county lines drugs gangs and stop young people being drawn into the deadly cycle of violence and exploitation. Before a child or young person joins a gang or decides to carry a knife, there are opportunities to intervene; in addition to tough law enforcement, we are using expertise and data to identify, divert and deter more people at an earlier stage.
‍

Our relentless focus on making our communities safer is having an impact. We are making over £130 million available this year to tackle serious violence, including funding for targeted police action, early intervention programmes and Violence Reduction Units (VRUs). VRUs have helped to embed a more joined-up approach in local areas blighted by violent crime and have already invested in over 175 initiatives in their first year of Government funding. These include programmes in schools, communities, prisons, hospitals, Alternative Provision and police custody suites. These interventions have helped around 100,000 young people, supporting those who have largely been identified as potentially high-risk, known to other services, or suspected to be involved in criminal and violent activity.
‍

We have also brought forward legislation to further enhance our response. The Police, Crime, Sentencing and Courts Bill, introduced to Parliament in March this year, contains several measures specifically focused on serious violence, including: a duty requiring public bodies such as police, health and local authorities to take a joined-up approach to preventing and reducing serious violence in their area; a requirement for local agencies to review the circumstances when an adult homicide takes place involving an offensive weapon; and Serious Violence Reduction Orders, which give the police the authority to stop and search known knife and weapon carriers.
‍

Ensuring law enforcement partners have the resources and powers they need to do their crucial work is central to our approach, and we are delivering on our commitment to put more police on our streets. More than 8,771 officers have already joined forces in England and Wales as part of our campaign to recruit an additional 20,000 over three years. We are also strengthening the criminal justice system to bring violent criminals to justice and prevent reoffending.
‍

We have invested £106.5 million over two years in Police Surge Funding to boost forces’ operational response to violent crime by providing extra capacity for hotspot patrols, knife crime operations, and investigations. In those 18 areas, over 100,000 weapons have already been taken off the street. This activity is crucial - every one of these seizures has the potential to prevent bloodshed and save lives.
‍

We have also stepped up our efforts to tackle the drug gangs that brutally exploit young people and fuel serious violence. Earlier this year we announced £148 million of investment to tackle drugs misuse, supply and county lines activity. Our crackdown on county lines is having a real impact, with more than 3,400 people arrested, more than 550 lines closed, drugs with a street value of £9 million and £1.5 million cash seized, and more than 770 vulnerable people safeguarded.
‍

I am acutely aware that for some children and young people the COVID-19 pandemic may have brought additional risks and dangers, as well as reducing contact with professionals and trusted adults. During this challenging period, the Home Office has worked closely with law enforcement and local agencies to monitor the changing threats and risks to children and young people. As a Government we have also provided additional funding both to frontline services and the charitable sector, to ensure that they are able to continue to support those at risk of violence.
‍

It is essential that we get this right. No young person should feel unsafe on our streets and no parent should have to worry that their child may not come home. We are making progress, but when young lives are being lost and families left heartbroken, we will always strive to do more, and we remain fully committed to doing all we can to deliver real and lasting improvements that make our communities safer.