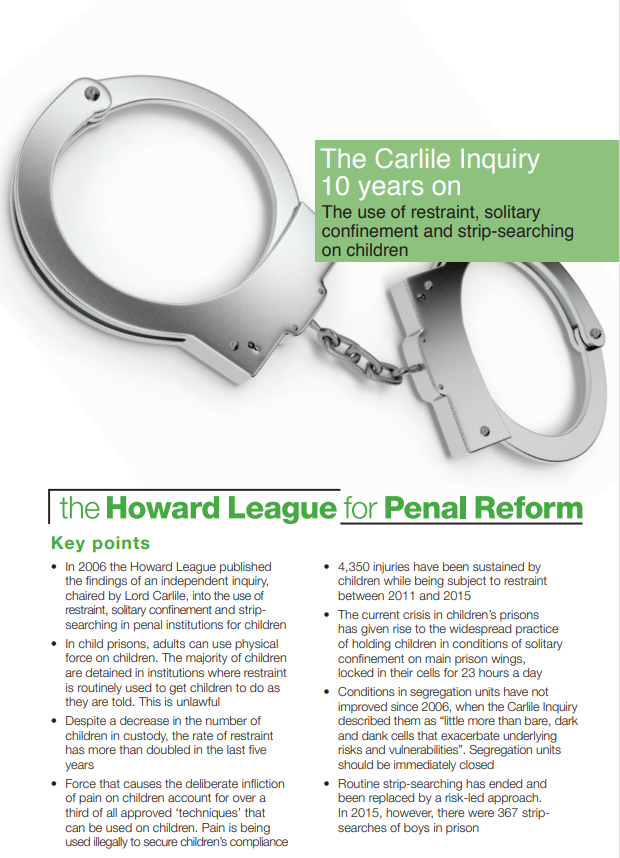 The Carlile Inquiry - 10 years on - The use of restraint, solitary confinement and strip-searching on children.

Ten years on from the Carlile Inquiry
‍

In the 10 years since the inquiry concluded, there has been much progress in youth justice, not least the reduction in the number of children in custody in England and Wales. At the time of the inquiry, there were nearly 3,000 children behind bars. This has reduced to fewer than 1,000 and is a considerable achievement (Ministry of Justice, 2016a). There is still much further to go to ensure that only the few children who require a period in a secure environment are in custody. In particular, the over-representation of BME children and those needlessly held on remand should be addressed.
‍

The secure estate has rapidly shrunk over the last 10 years. Of the 11 institutions visited by the inquiry team in 2005, only six of which still hold children. As recommended by the inquiry, there have been particular successes in reducing the number of ‘split-site’ institutions, where adults and children are detained separately but within the same prison: there were nine split sites and now there are two. One of the privately-run secure training centres, where Adam Rickwood died, has been closed.
‍

The reductions, however, have also given rise to challenges. Children are now held further away from home and many of the small, local secure units, highlighted by the inquiry as providing the best care and support for children, have been closed in order to make financial savings. In 2005 there were 15 secure children’s homes, which held up to 235 children. There are now eight units with a total of 117 places. There are no secure children’s home beds in London, or in the wider South East and the East of England.


Since the publication of the Carlile Inquiry, five more boys have died in prison.
‍

In relation to the three specific areas that the inquiry looked at – restraint, solitary confinement and strip-searching – there have been some improvements but fundamental concerns remain. The slow and piecemeal progress in implementing the recommendations of the 2006 inquiry means that, 10 years on, children continue to be placed in danger and, because of poor and erratic treatment, they continue to reoffend.
‍

The privately-run secure training centres have been subject to serious allegations of abuse in the last year. At Rainsbrook secure training centre (STC), where Gareth Myatt was unlawfully restrained to death, inspectors found that: “Poor staff behaviour has led to some young people being subject to degrading treatment, racist comments and being cared for by staff who were under the in influence of illegal drugs” (HMIP, 2015a). At least six members of staff were dismissed. In January 2016 an investigation by the Panorama programme, aired on the BBC, revealed serious incidents of child abuse, coercion and falsification of records at Medway secure training centre. At the time of writing, the police investigation into the allegations at Medway was ongoing.
‍

In May 2016, the government published a damning report on Medway, which concluded that “the lack of clarity on the purpose of a STC and the leadership within the STC has driven a culture that appears to be based on control and contract compliance rather than rehabilitation and safeguarding vulnerable young people” (Ministry of Justice, 2016b).
‍

The Medway report, although long overdue, is welcome. The majority of children in prison, however, should not be behind bars.


Reform in youth justice must focus efforts on continuing to reduce the number of those incarcerated. At the same time, the treatment of those children still in custody must be addressed if the mistakes of the past are not to be repeated.
‍

No matter what happens in the future, however, children are being harmed in prisons today and steps to ensure their safety must be taken immediately.