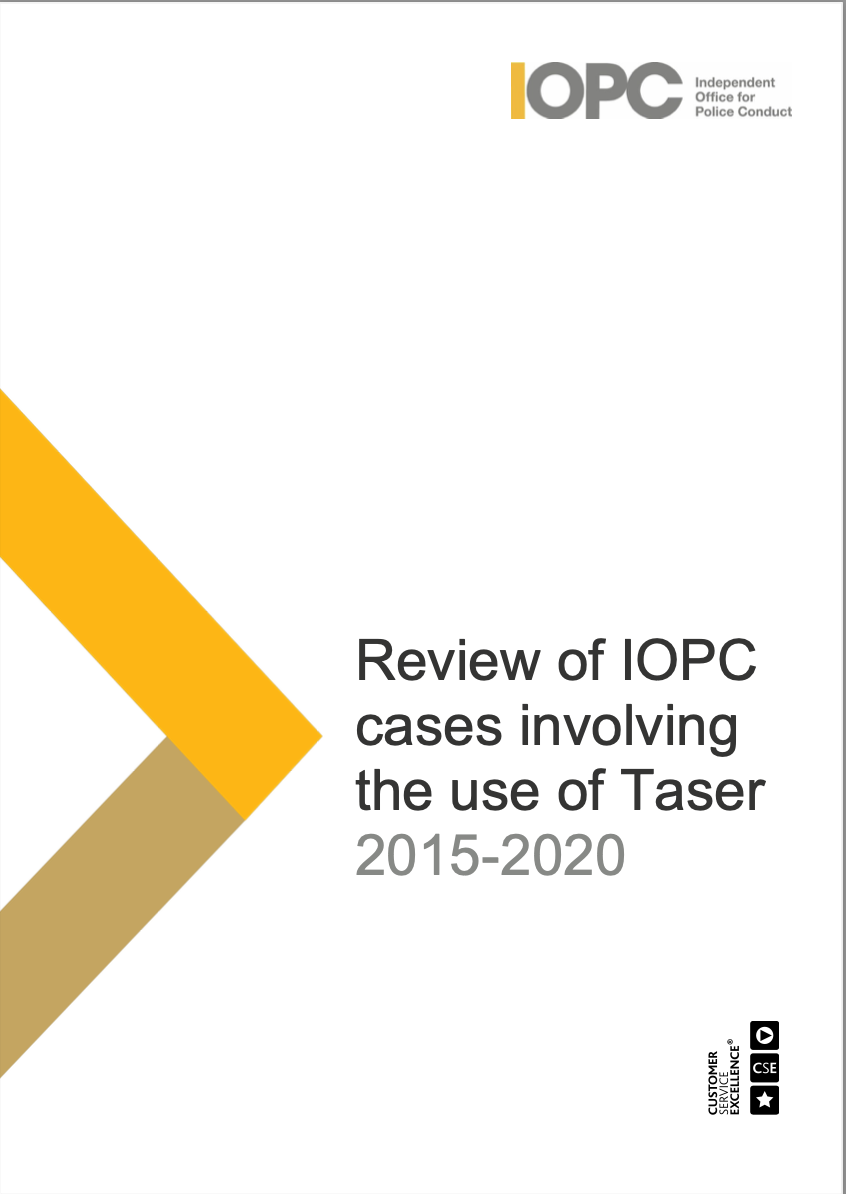 Our aim in publishing this report is to contribute to the growing evidence base around Taser use, help develop a deeper understanding of the perceptions of community groups and stakeholders about Taser, and improve public confidence in policing through accountability, engagement and transparency.
‍

Tasers are recognised internationally as useful police tools and can be effective in diffusing dangerous situations. However, some community groups and stakeholders have told us of growing concerns, particularly about the disproportionate use of Taser against Black men, people with mental health concerns and its use on children.
‍

Some national organisations, academics and community members have concerns that Taser may be used as a default choice where other tactical options could be more effective.
‍

Through our engagement with stakeholders and community groups, it is clear there is some divergence between community expectations about when a Taser should be used, and the situations in which Taser can be used legitimately under current national guidance. This was also identified by our predecessor organisation¹.
‍

In May 2020, we called for greater scrutiny, transparency, and robust oversight of Taser use by national and local leaders to provide public reassurance and instil confidence².
‍

This report brings together an evidence base informed by:
‍

Of the 101 independent investigations we reviewed: 108 people were subjected to Taser use. 94 people had a Taser discharged against them.
‍

Type of Taser use
‍

Home Office data³ shows that the number of times Taser was used has increased, with Tasers being used in around 32,000 incidents in 2019/20. This increase may reflect an improvement in police recording practices. It may also reflect the increase of Taser-trained officers and Tasers available in police forces (based on forces’ strategic assessments of threat and risk), or officers dealing with more incidents that have the potential for conflict.
‍

Home Office data shows that in most incidents where Taser is used, it is not discharged, with fewer than 12% of incidents involving Taser discharges. In contrast, the majority of cases we investigated involved a Taser being discharged. This is a reflection of the fact that we investigate the most serious and sensitive cases.

Use of Taser in potentially unsafe locations

Fourteen of the cases we reviewed involved the use of Taser in potentially unsafe locations or circumstances. In these cases, we found evidence that officers had not considered adequately the risk of injury to individuals, based on the environment and the individuals’ vulnerabilities, as part of their ongoing risk assessment.

Of the 94 people against whom a Taser was discharged, over half were tasered more than once. Some cases involved multiple discharges because the Taser missed, did not effectively connect with the individual, or did not successfully incapacitate them. The number of discharges does not therefore correspond to the number of times the individual actually experienced the effects of Taser.

Taser use for compliance
‍

College of Policing (CoP) national guidance states that “Taser should never be used for procedural compliance”. We identified potential issues with Taser being used for compliance in almost a quarter of the cases we reviewed. We found in some cases that officers failed to identify, and as a result failed to consider, how a person’s vulnerabilities might affect their ability to understand and comply with instructions.
‍

Use of Taser in custody or medical settings
‍

Despite the relatively small number of cases we reviewed involving the use of Taser in custody or medical settings, we remain concerned about these incidents. Home Office data shows that there were hundreds of Taser uses in these settings in 2019/20, including over 100 discharges.
‍

Use of Taser in drive-stun mode
‍

Although 16 of the 101 cases we reviewed involved a death, it is important to emphasise that these deaths were not necessarily the result of Taser use. However, four inquests have found that the use of Taser, in combination with other factors, contributed to or were relevant in a person’s death.
‍

Family members of those who died told us they are particularly concerned that officers lack an understanding of the risks of Taser use. They want more research to be conducted to understand the risks associated with Taser, which can then be used to inform guidance and training.
‍

Six children were involved in the cases we reviewed⁷. Home Office data for 2019/20 shows that around 2,800 Taser incidents involved children, 134 of which were Taser discharges. This raises questions about whether forces are considering appropriately the requirement to voluntarily refer incidents of Taser use against children to the IOPC.
‍

The IPCC’s 2014 report⁸ highlighted concerns about the use of Taser on young people. These concerns remain, with stakeholders increasingly concerned about the limited research around both the physical and psychological risks of Taser use on children.

Home Office data shows that officers did not report people having either a physical disability or mental health concerns in around 80% of Taser incidents. However, other evidence suggests that mental health is a more common feature in Taser incidents than the Home Office data suggests. For example, the IPCC’s 2014 report on Taser and the 2016 report on Use of Force⁹, found that mental health was a significant factor in the referrals we received and in the investigations we reviewed. The CoP’s analysis of 2017/18 use of force data¹⁰ found that a person having mental health concerns increased the odds of Tasers being both drawn and discharged.
‍

Some stakeholders and community groups have expressed concerns that police officers do not always have the skills required to communicate effectively with people who have mental health concerns or learning disabilities, and that this increases the likelihood of officers using force.

People reported to be violent, aggressive or resisting and in possession of weapons
‍

The CoP’s analysis of use of force data¹¹ found that the factor with the strongest association with a Taser being discharged was the officer reporting that they faced active or aggressive resistance from the individual. This is in keeping with the IPCC’s 2016 report on use of force, which found that Taser was often used following reports of violent behaviour. The IPCC’s 2014 report on Taser use and 2016 report on use of force also found that the possession of weapons was a common feature in the Taser cases reviewed.
‍

Of the cases we reviewed, 108 people¹² were subjected to Taser use over the five- year period. The vast majority of people (90 of 108), were described or reported by officers as being aggressive, violent or resistant. Just over a third were in possession of a weapon at the time of the incident. We found that mental health or acute behavioural disturbance was a factor in 80% of incidents in which a person was in possession of a weapon.

We welcome the introduction of the CoP’s new conflict management guidelines and the proposed training to support it. We found examples of good practice by officers who utilised effective communication and de-escalation skills. However, in just under a third of the cases we reviewed, we identified potential missed opportunities for officers to de-escalate situations. This meant that during an incident there were chances for officers to use communication and negotiation skills to defuse a situation rather than having to resort to force.
‍

In a third of our cases, officers made inappropriate comments or communicated inappropriately during the incident. Some comments were of a derogatory nature.

With rates similar to Home Office ethnicity data on Taser use, Black people were disproportionately involved in our Taser investigations¹³. Asian people were slightly under-represented in our cases.
‍

In the cases we reviewed, Black people were, as a proportion, less likely to have been subjected to a Taser discharge than White people but were more likely to be involved in cases where the Taser was aimed or red dotted. This is contrary to Home Office data which shows that while Black people are more likely to be involved in Taser uses overall, there is little difference between the likelihood of Black people and White people being subjected to a Taser discharge.

In the majority of cases involving either allegations of discrimination or common stereotypes and assumptions, there was evidence that the individual concerned had mental health concerns or a learning disability. This supports findings by others that the intersectionality of race and mental health can increase the risk of higher levels of use of force.

Concerns about race discrimination and disproportionality is one of the most common issues raised by community groups and stakeholders in relation to Taser use. There is particular concern that the stereotyping of young Black men and boys is leading to them being disproportionately subjected to police use of force, including Taser. Black communities we engaged with want their concerns to be heard and acted upon. They believe that individual incidents involving the use of Taser cannot be viewed in isolation, but in the wider context of long-standing tensions between the police and the Black community.
‍

We welcome the fact that the CoP and National Police Chiefs’ Council (NPCC) have commissioned research to consider disproportionality in Taser use. Our findings suggest that this is an opportunity for the issues we have outlined above to be considered. It is imperative that this research is robust and that the findings from it are published and used to inform national policy, training, guidance and practice. The actions identified must be monitored, their impact evaluated and reported upon.
‍

Community groups have raised concerns with us about the disproportionate policing of their communities compared with other racial groups and the impact of racial bias that influences the beliefs, actions and decisions of officers.
‍

Stakeholders and community groups want access to better national data on the use of Taser, that is disaggregated to better enable community scrutiny. They also want more opportunities to review and discuss incidents that have caused them concern, so that opportunities for learning can be identified and acted upon.
‍

⁵ Acute Behavioural Disturbance is a term used to describe symptoms that can be caused by a number of conditions. It is also sometimes referred to as ‘excited delirium’. These conditions are associated with extreme mental and psychological excitement, which can be characterised by extreme agitation, hostility, exceptional strength and endurance without fatigue.

⁷ In this review, the term ‘children’ is defined as those under 18 years-old.

⁹ IPCC (2016). Use of force report. Retrieved from https://policeconduct.gov.uk/sites/default/files/Documents/research- learning/IPCC_Use_Of_Force_Report.pdf

¹⁰ College of Policing (2020). Police use of force: Tactics, assaults and safety. Retrieved from https://whatworks.college.police.uk/Research/Documents/Use_of_force_report.pdf

¹¹ College of Policing (2020). Police use of force: Tactics, assaults and safety. Retrieved from https://whatworks.college.police.uk/Research/Documents/Use_of_force_report.pdf

¹² Three of the 101 cases we reviewed involved the use of Taser on more than one person.

¹³ Twenty-two (22%) of the individuals involved in our independent investigations were Black, despite Black people making up less than four per cent (4%) of the population.