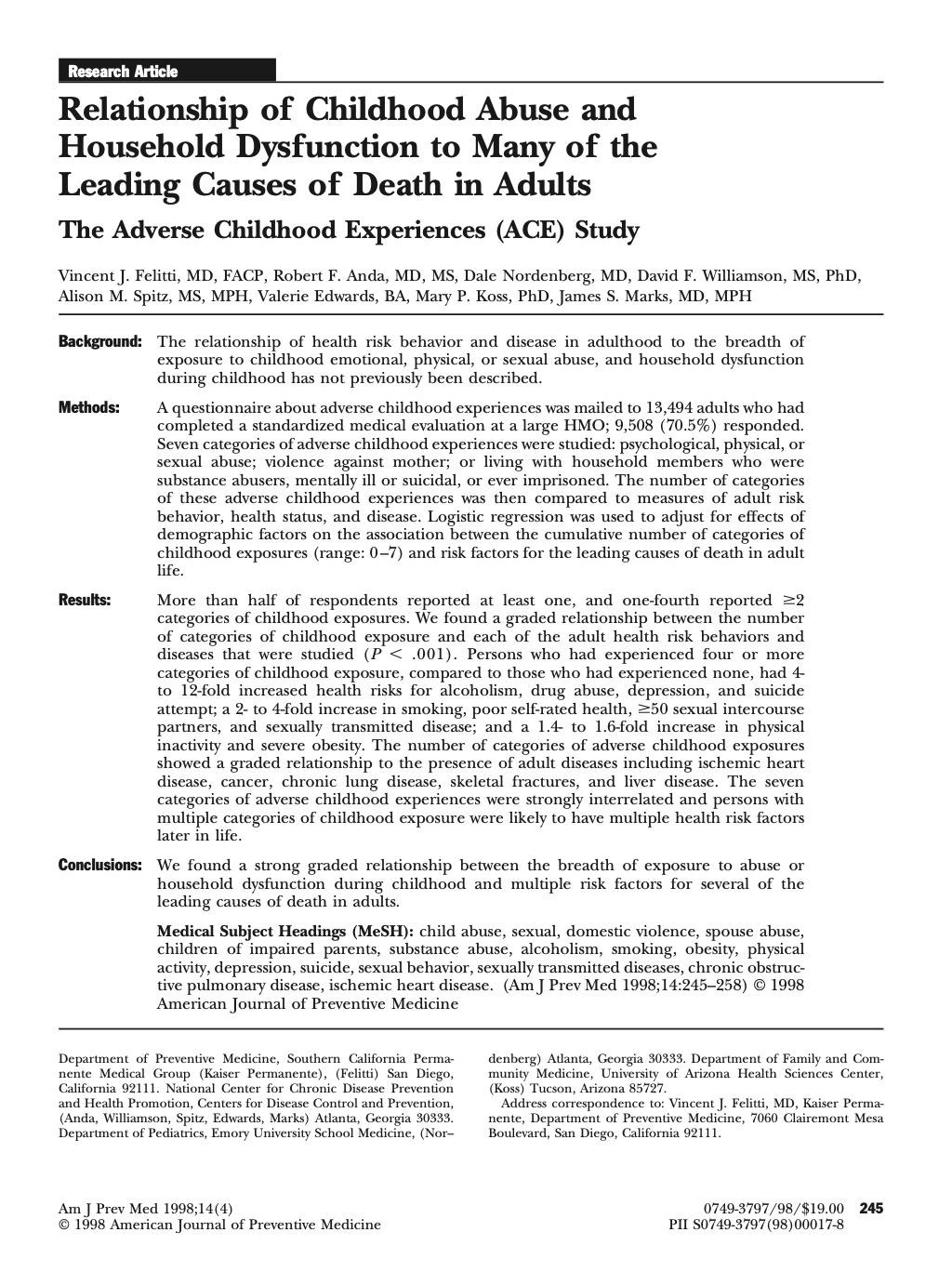 Only recently have medical investigators in primary care settings begun to examine associations between childhood abuse and adult health risk behaviors and disease.¹,⁵ These associations are important because it is now clear that the leading causes of morbidity and mortality in the United States⁶ are related to health behaviors and lifestyle factors; these factors have been called the “actual” causes of death.⁷ Insofar as abuse and other potentially damaging childhood experiences contribute to the development of these risk factors, then these childhood exposures should be recognized as the basic causes of morbidity and mortality in adult life.

Although sociologists and psychologists have published numerous articles about the frequency⁸,¹² and long-term consequences¹³,¹⁵ of childhood abuse, understanding their relevance to adult medical problems is rudimentary. Furthermore, medical research in this field has limited relevance to most primary care physicians because it is focused on adolescent health,¹⁶,²⁰ mental health in adults,²⁰ or on symptoms among patients in specialty clinics.²²,²³ Studies of the long-term effects of child- hood abuse have usually examined single types of abuse, particularly sexual abuse, and few have assessed the im- pact of more than one type of abuse.⁵,²⁴,²⁸ Conditions such as drug abuse, spousal violence, and criminal activity in the household may co-occur with specific forms of abuse that involve children. Without measuring these household factors as well, long-term influence might be wrongly attributed solely to single types of abuse and the cumulative influence of multiple categories of adverse childhood experiences would not be assessed. To our knowledge, the relationship of adult health risk behaviors, health status, and disease states to childhood abuse and household dysfunction²⁹,³⁵ has not been described.

We undertook the Adverse Childhood Experiences (ACE) Study in a primary care setting to describe the long-term relationship of childhood experiences to important medical and public health problems. The ACE Study is assessing, retrospectively and prospectively, the long-term impact of abuse and household dysfunction during childhood on the following out- comes in adults: disease risk factors and incidence, quality of life, health care utilization, and mortality. In this initial paper we use baseline data from the study to provide an overview of the prevalence and interrelation of exposures to childhood abuse and household dysfunction. We then describe the relationship between the number of categories of these deleterious child- hood exposures and risk factors and those diseases that underlie many of the leading causes of death in adults.⁶,⁷,³⁶,³⁷