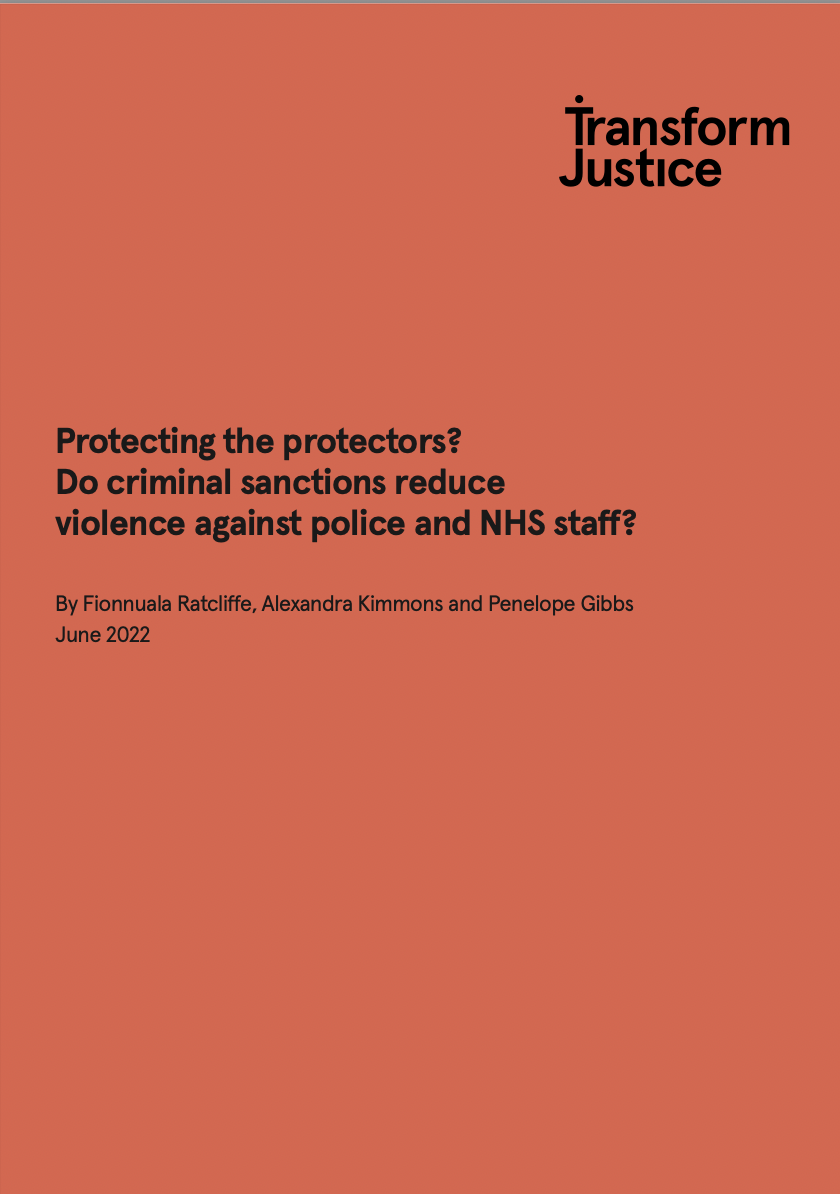 Protecting the protectors? Do criminal sanctions reduce violence against police and NHS staff?

Of course no one should be assaulted while carrying out their work. But I do question whether prosecution really helps. It’s expensive and time consuming and I don’t know what it accomplishes. These aren’t premeditated acts, after all. Instead, we should be looking at ways of de-escalating situations, and providing support to victims when needed. (magistrate)

Many emergency workers suffer violence from members of the public in the course of their work. Stories from police officers and A&E staff are particularly common, but such violence also affects staff on hospital wards and in specialist hospitals, as well as prison officers.

Those who employ or represent emergency workers, under pressure to deal with increasing assaults against staff, look to the criminal justice system as a solution. The government, jumping at the (seemingly cost-free) opportunity to signal support for public sector workers, introduced a new offence and harsher punishments for violence and abuse towards emergency workers in 2018, before making penalties harsher still in the Police, Crime, Sentencing and Courts Act this year. Since the offence was introduced, almost 130,000 assaults on emergency workers have been recorded (the vast majority of which were towards the police), and approximately 75,000 were brought to court.

It’s easy to believe that a more punitive response will deter people from being violent and abusive towards emergency workers. But there is no evidence that harsher sanctions deter this sort of crime, and the government has denied any deterrent effect. Instead, the hike in prosecution and sentencing is having serious unintended consequences; sweeping more people into the criminal justice system, particularly those with mental health conditions, cognitive impairments or who are neurodivergent.

A universal mental health screening tool would help, as would better use of bespoke diversion courses and restorative justice.

There’s plenty more employers can do to support victims of assault without resorting to the criminal justice system. They could start with responding more empathetically. NHS workers shared examples of when they felt their supervisor was blaming them; police officers were advised to “suck it up”. Staff who are assaulted want “recognition, and some sort of remedy”; employers can provide this through consistent debriefings, welfare plans, counselling and taking action to prevent incidents happening again.

Assaults on police are correlated with police use of force and perceived mental health status of the person committing the assault. There are serious shortcomings in police training for how to engage and communicate with people with mental health conditions. New conflict management guidance and training should hopefully improve this. But some police are reluctant to spend time improving how they respond to mental health incidents – they’d rather focus on solving crimes. Promising initiatives like street triage, which integrates the expertise of mental health professionals with the policing frontline, may present a good compromise, but no one has looked at whether these reduce violence and abuse towards officers.

Opportunities to prevent assaults happening in the first place exist in NHS settings as well. Mental health training for most NHS workers is basic, and one NHS worker said they knew nothing about how to de-escalate a situation that risked turning violent. There is room to improve training about physical contact with patients and members of the public. Elsewhere, Bedfordshire NHS Trust has introduced a uniformed police liaison officer on their ward – a controversial approach, but the move has reduced violence on the ward, and the officer has helped to design out crime by identifying incident hotspots and adapting staff shift patterns accordingly.

Harsher punishments will not deter people from violence and abuse. The number of assaults on emergency workers have actually increased as sentences have got harsher. If we want to reduce the harm caused by violence and abuse, employers can improve their support to victims, and give better training to staff to prevent incidents happening in the first place. Where a criminal justice response is necessary, we can make much better use of effective options for resolving the harm without going to court, such as diversion and restorative justice.