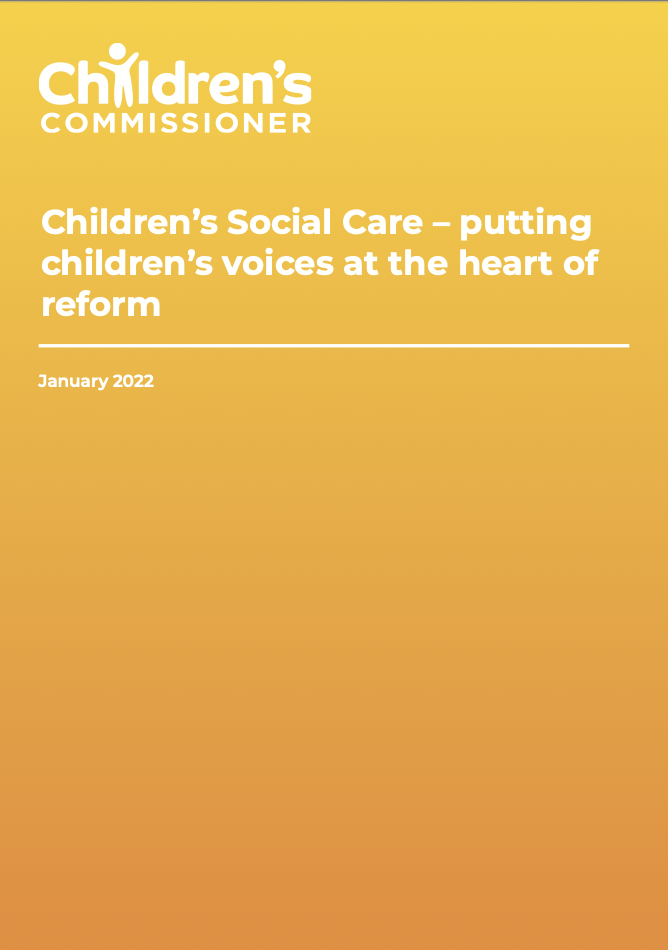 The children for whom the Review of Children’s Social Care needs to deliver.

The below cases, which come from the Children’s Commissioner’s ‘Help at Hand’ (HAH) advice and representation service, or from serious case reviews, demonstrate the issues the Review needs to help solve, and the complexity and compounding needs children have. Names, and other identifying details have been changed where necessary.

‍Katie is a 15-year-old girl whose mother died of cancer during lockdown. She was the main carer for her mum and her sister while her mum was dying. Since her mum’s death, Katie has been living with family friends through a private fostering arrangement and with her grandmother. However, she has suffered with grief, and in the past six months has been engaging in increasingly risky behaviour. She is self- harming and has twice been admitted to hospital to have her stomach pumped after drinking. She is hanging around with a known drug dealer and has not been to school for two months, she is currently on track to fail all her GCSEs, but her school think it is best for her to stay at home.

Katie is on a trajectory of increasingly poor outcomes, and yet no one is acting. Instead of intervening to help her get her GCSEs, multiple agencies are waiting to see if she gets into even more danger. We need a system which is focused on helping Katie realise her potential and can provide an integrated offer. The thing she most needs is therapy to support her with her grief, this will help her return to school and stop engaging in risky behaviour. But at the moment the educational and social care benefits of providing help is not sufficient rationale for CAMHS to intervene. An integrated system of social care and CAMHS support, with joint thresholds and common outcomes, whereby an assessment by one agency could open-up support from another is needed.

‍Chris grew up in a family with domestic violence, and he had ADHD which meant that he sometimes struggled at school. Despite this, Chris did well at primary school.

However, when he got to secondary school he struggled. Chris became involved with gangs and engaged in increasingly dangerous behaviour. By the time Chris was 13 he had been arrested for a range of different offences and had been found with a large quantity of drugs. Chris told authorities he was in fear of his life. During this period Chris’ family were repeatedly referred to social services, but it was decided they did not meet the threshold for support. Chris was not attending school but was a virtual pupil at a Pupil Referral Unit. He got short-term support from a Youth Offending Team, which was stopped when he went to live with his uncle. This broke down and he returned to his mum who told the local authority that she thought Chris was going to be killed and asked her housing authority to move her out the area to help protect him. Neither acted. Chris was shot and killed when he was just 14. By the time of his death, Chris had been known to 12 agencies, yet it appears that the last time Chris had a stable and supportive relationship with any professional was when he was at primary school.

More details about Chris’s life, and the failures in his care can be read at: Serious Case Review – Chris (newhamscp.org.uk)

There were significant failures in the police and local authority response to Chris leading up to his murder, but they are indicative of a fragmented system within which no one took responsibility for Chris or took the time to understand what was really happening in his life. Chris was expected to engage with service on their terms, and when he was seen as too difficult, he was simply passed on. Again, Chris needed an integrated offer covering education, health, youth offending, housing and social care, but instead was passed between them.

Rory is an 11-year-old boy with Autism Spectrum Disorder who is growing up in care. Last year he was living in a children’s home when the home evicted him at short notice. Rory had to leave at such short notice he missed his last day at primary school. Rory’s local authority had nowhere for him to live locally, so he was placed in another children’s home as an ‘emergency measure’. Five months later Rory is still in this ‘emergency placement’ away from home. He does not know where he will be living next, or when he will move. Moreover, because Rory’s placement was deemed to be a temporary measure, no school was found for him. Because Rory needs a special The children for whom theReview of Children’sSocial Care needs to deliver.

Firstly, children like Rory should be looked after locally. The local authority should ensure that have sufficient number of homes that can care for children like Rory. Homes should be adapting to the needs of the child, so that children stay put when their needs change, not vice versa. When children do have to move, this should be properly planned and done slowly, with significant penalties for a local authority or children’s home which evicts a child at short notice. Rory should know that his next home will be a long-term placement, without him being left in limbo not knowing where he will go next or when. The next home should be part of an integrated plan for Rory, with a home and a school place found in unison, rather than finding a placement and then planning for a school.

‍Jereome is a 16-year-old looked after child with complex learning disabilities, behavioural issues and autistic traits. He has an assessed learning age of 7. After multiple failed placements, he had made great improvements in a children’s homewith a specialism in Emotional and Behavioural Difficulties, which was out of his local authority’s area. He had been there for two years and had developed good relationships with the staff, including the teachers in his specialist educational provision nearby. The local authority decided to move him back into his home area to unregulated accommodation providing semi-independent living, with two adults supporting Jerome. They said this was to make contact with his family easier (although this was sporadic) and to ensure he could transition to adult services in the area. The move was opposed by the children’s home manager and professionals working with Jerome locally, as well as his advocate and Independent Reviewing Officer. Jerome consistently said he didn’t want to move and refused to engage in any conversations about this. HAH made representations on several occasions but the local authority went ahead. Jerome was highly distressed in the days before the move, which led to him running away and being handcuffed by police on the day he moved.

As feared, Jerome was not able to manage in his semi-independent accommodation. There were several safeguarding incidents, both inside and outside the property, and the staff were not sufficiently trained to support him. Ultimately, the local authority accepted that the new accommodation was not working for Jerome and moved him to a children’s home within his local area, after more than 10 months of disruption.

‍The local authority were right to want Jerome to live locally but once Jerome was settled out of area, it was not in his best interests to be moved, and have all his relationships turned upside down. Jerome was happy and settled, and the failure to listen to him, or those who knew him best was disastrous for Jerome. Many local authorities look to move children to unregulated accommodation once they reach 16, often for financial reasons but also to help in their transition to independence. We believe all homes in which children live, unless foster or kinship care, should be regulated and inspected. In the short-term, we would like the ban on unregulated accommodation for under-16s to extend to children who have special needs or other vulnerabilities. In this case the local authority were right to start planning for Jerome’stransition to adulthood well in advance, but cannot mean compromising the care Jerome needs as a child.

Children who will need support from adult social care beyond 18 need a smooth transition to this service, alongside continued support as a care leaver.

‍Tommy is 15 and had very tough start in life, where he experienced significant early childhood trauma. He has severe autism. Tommy was adopted, but his adoptive parents still needed help. Over many years his adoptive parents sought help from both the local authority and NHS. In the end, his adoptive parents became unable to manage his behaviour, and he was admitted to hospital and then transferred to a mental health unit. The unit was unable to keep him long-term, so the local authority applied for an Interim Care Order and searched for a therapeutic children’s home. However, despitecontacting hundreds of providers nationally, it was not possible to identify a residential setting that was willing to accept him and could meet his needs. Tommy was assessed as requiring four adults around him at all times, with a Deprivation of Liberty authorisation from a judge so that he could be prevented from absconding. As an interim measure, the local authority rented a house where Tommy lives with his adopted mum and four full-time carers, with floating support from mental health professionals. However, all involved accepted that this could not be a long-term plan because Tommy needs therapeutic support in a specialist residential setting.

‍There is a critical need for more therapeutic children’s homes with specialisms in autism, trauma, learning disabilities and complex needs. However, there are also many parents, like Tommy’s, who want to continue caring for their children at home, if they have the right support. It should not be a binary choice between a family being in care or at home. Local, flexible solutions that work with family can ensure more children stay at home, or at least very close to their families. We need more help for families at an early stage, particularly with specialist mental health services for children, support for parents, community care packages and short breaks, which many families desperately need to avoid burnout and breakdown. Investment when parents ask for it could prevent the crises which leave the most vulnerable children unable to stay with their families, and yet judged as too high-risk for most children’s homes. This often leaves them in highly unsuitable situations, which cause further trauma and make returning home or to less restrictive settings even more difficult.