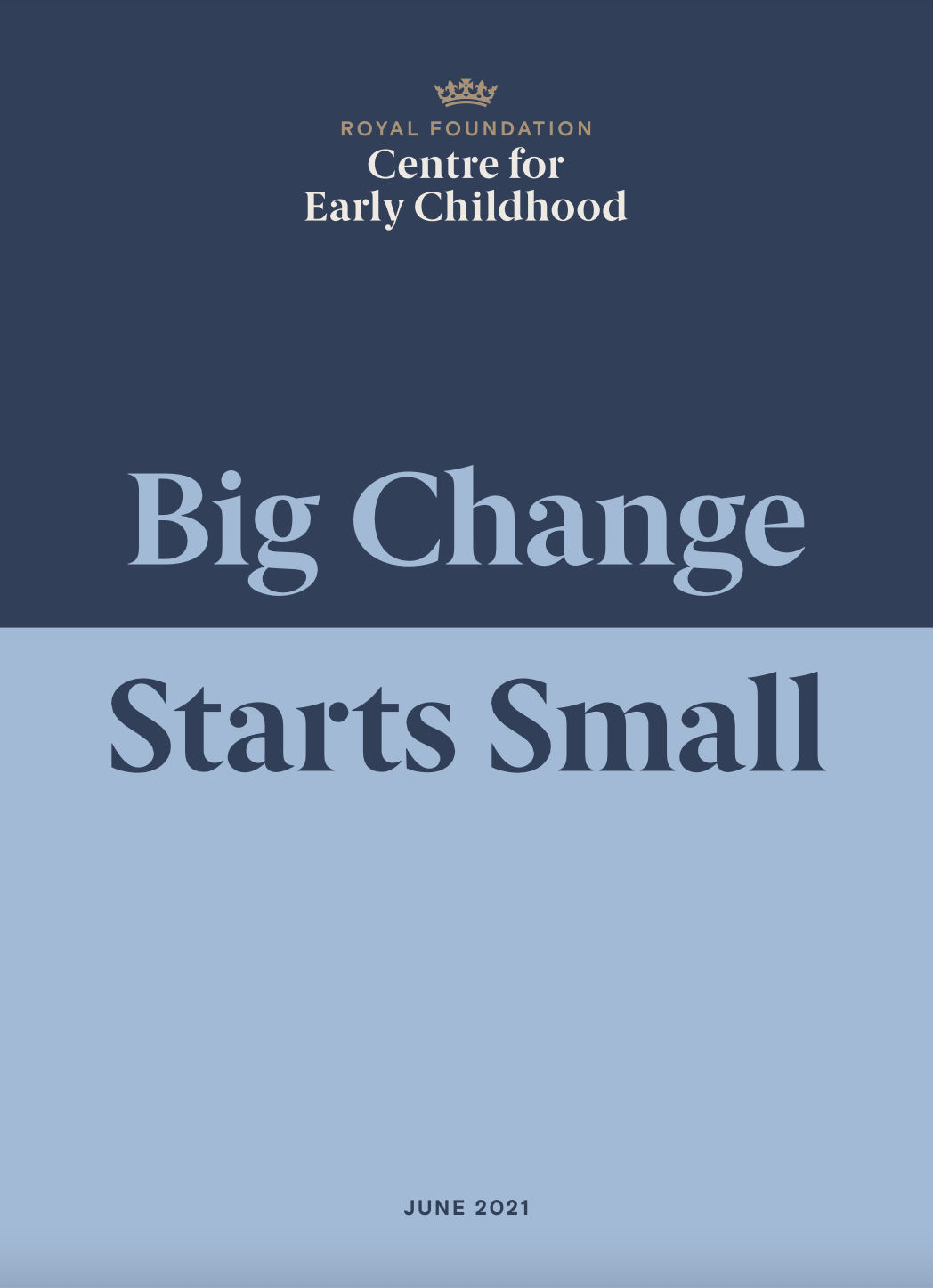 In the first chapter, ‘Shaping Our Lives’, we set out in summary the science of early childhood development and explain why healthy brain development is vital in the first five years. With expertise from The Center on the Developing Child at Harvard University and from neuroscientists and academics in the UK who are part of our steering group, we explain why the early years offer such a huge opportunity to lay the foundations for healthy development, with potential life-long benefits for mental and physical health. Indeed, a clear association has been found between early childhood experiences and life outcomes, including financial wellbeing and factors such as addiction and crime.
‍

Crucially, the science tells us that while genes play a huge role, development is not pre-determined. From pregnancy onwards, the context in which we develop matters too. Supporting healthy development in early childhood goes far beyond looking after the physical needs of babies and infants. Our earliest relationships, environments and experiences can profoundly shape the developing brain, which is characterised by exceptional plasticity during this period. This in turn influences the adults we become and also how we parent the next generation.
‍

All those helping to raise children are key to nurturing healthy development and building resilience. Simple, consistent and responsive interactions between caregiver and child strengthen neural connections in the brain and contribute to secure attachment — a sense of safety and security, help with regulating emotions and a safe base from which to explore. These early stages of development, and the brain circuits that underpin them, are all formed in the earliest years. They help infants learn how to regulate their emotions, feelings and behaviour, and build their sense of agency and confidence to ultimately navigate their physical and social worlds independently.
‍

This means that all those raising our under-fives themselves need both practical and emotional supports. A caregiver’s ability to support a child depends on their own wellbeing and mental health, and their understanding of their own emotions and the feelings of others around them.
‍

The second chapter, ‘The Economics of the Early Years’, looks at the financial costs to society of failing to make the most of the golden opportunity of the early years. The Royal Foundation has partnered with the London School of Economics to calculate the cost of lost opportunity in early childhood, and has found that in England alone we are paying at least £16.13 billion each year. This is the cost to society of the remedial steps we take to address issues — from children in care to short- and long-term mental and physical health issues — that might have been avoided through action in early childhood. This sum of £16.13 billion is equivalent to nearly five times the total annual spend in England on early education and childcare entitlements, and around 44 times the annual expenditure on specialist perinatal mental health support.
‍

While a figure of £16.13 billion sounds high, it is in reality an underestimate, excluding for example the later costs of unmet need and the knock-on impacts for other individuals and relationships which may be harmed as a consequence of failing to provide the right support early on. It also says nothing of the losses to the productivity and earnings of individuals over their lifetime — which in US studies have been shown to be sizeable.
‍

This new estimate points to the huge opportunity created by investment in early childhood. Economic evidence is growing all the time about ‘what works’ — both in terms of individual early years programmes and whole system changes — to provide effective and preventative early help rather than later, remedial support. And there is a growing consensus across communities, sectors and traditional political divides on tackling this imbalance in years to come.
‍

In the third chapter, ‘Where We Are Now’, we ask how babies, young children and their families are doing in the UK today and explore the strength of the early years workforce. Nearly a third of five-year-olds are not reaching a good level of development, according to their teachers, and the gap between more disadvantaged children and their peers at age five has already opened up significantly: analysis of results indicates that disadvantaged children are 4.6 months behind their peers by the end of the reception year.
‍

Worryingly, there are also signs of serious prevailing mental health issues among parents: perinatal mental illness affects up to 20% of new and expectant mothers, according to the NHS, and more in areas with high levels of deprivation. Fathers can also be affected and this is a problem not just for parents: pre-school children of parents with poor mental health are three times more likely to have a mental health difficulty themselves than children whose parents have good mental health, and the effects can continue into later childhood and adulthood. We live at a time when mental health problems are all too common and are one of the main causes of the overall disease burden worldwide [1]. Yet Ipsos MORI found that only 10% of parents took time to look after their own mental wellbeing during pregnancy [2]. Providing as much protection as we can in the early years is our best opportunity to halt or even reverse the increasing prevalence of mental health issues, particularly among children and young people.
‍

For some children and some families, the risk of experiencing adverse events that have negative impacts on wellbeing and development is greater than for others. The Children’s Commissioner has reported that over half a million children in England live in the most vulnerable circumstances, and we know that a far bigger group experience other forms of adversity and significant economic challenges. An estimated 1.3 million babies and pre-school children live in poverty: this represents over a third of children aged under five in the UK, and families with children under three years old face the highest risk. A number of ethnic minority groups are over- represented within this group.
‍

The professionals who make up the early years workforce stand alongside parents as essential caregivers. Since the 1990s there has been substantial investment in early education, but there is more that could be done to strengthen the system. Building more capacity and valuing a committed workforce will help address problems with retention. Professionals also need the right support and training so that they are equipped to support the emotional and social development of under-fives, as well as their physical development.
‍

The coronavirus pandemic has made things harder for many families with babies and young children, taking an additional toll on the mental health and wellbeing of children and parents — and the effects have been felt most by those already living in disadvantaged or difficult situations. The impacts of this particularly challenging time have started to become apparent, with an increasing number of reports of serious harm affecting the youngest children and teachers finding that the language and personal development of those starting school is often behind where it should be.
‍

In the fourth and final chapter, ‘Opportunities for Change’, we outline the huge opportunities we have to bring about positive change in every aspect of society and for generations to come. Armed with knowledge from the science and data, we set out six practical areas of opportunity where, by working collaboratively, we can make a difference.

Raising awareness of the extraordinary impact of the early years

Knowledge of the importance of the early years is low. We need to increase societal understanding of the transformative impact of early childhood. We also need to change the way we think about the first five years — ensuring that emotional development is given due focus and attention by all and that caregivers have sufficient understanding and knowledge to support healthy development.
‍

Healthy development requires nurturing relationships, environments and experiences. We need to value the role of caregivers, to prioritise their mental wellbeing, starting in pregnancy, and to build their capacity and capability. Surrounding this we should create nurturing environments and experiences, including access to nature and outdoor space.
‍

Caregivers do not exist in a vacuum; we need family-friendly communities that create non-judgemental environments, encourage help-seeking and ensure that early childhood is prioritised locally. Workplaces can also play a role, shaping a culture that supports
the early years.
‍

There are thousands of dedicated and hardworking individuals who are committed to supporting families in the early years. We need
to recognise the importance of the early years workforce and to reflect this both in the quality of training and in support for their own emotional wellbeing. Where needed, we should also encourage a more holistic view of the early years that includes emotional as well as physical needs, and provide easy access to the latest scientific research to inform practice.
‍

Putting data to work for the early years

Data on babies and infants are both patchy and unconsolidated. At the same time, there are gaps in research and in the implementation of best practice. We need to gather data routinely and consistently from birth onwards and find ways to share information between all those who provide care and support in the early years. We should undertake to build a more substantive body of knowledge, including psychological and behavioural science as well as longitudinal studies and economic evaluations. And where we have research, this should be used to inform programmes and practice.
‍

We need long-term commitment to building and sustaining an effective system which includes a national framework that will provide a common agenda to drive holistic and preventative early childhood support; deeper collaborative working; and a measurable child outcomes framework.