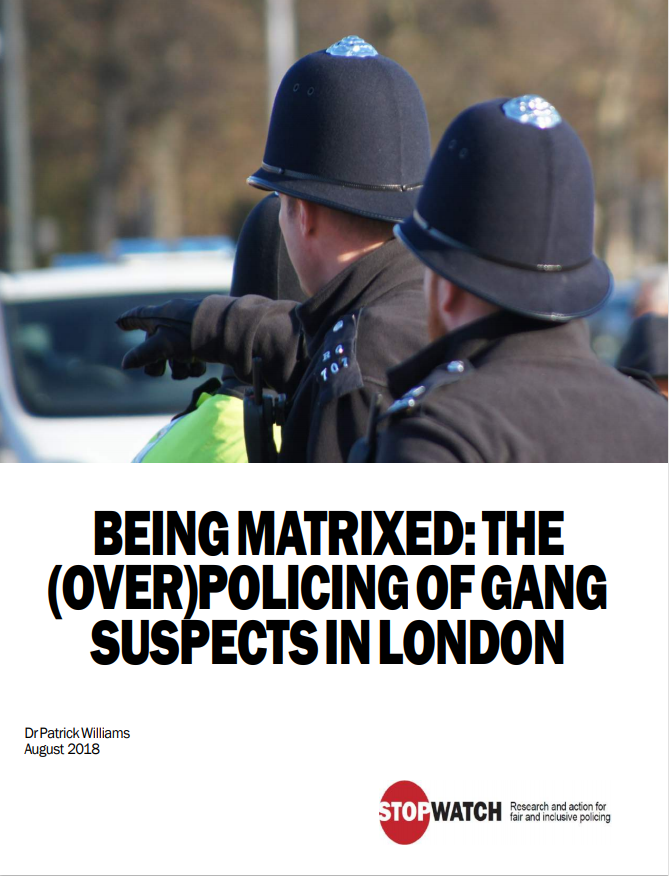 Being Matrixed: The (over) policing of gang suspects in London

It is undeniable that the media, police and political focus on street crime, urban gangs and youth violence has become more prominent over recent years. This increased attention has an impact on the criminal justice system, policing practices and the communities being policed. With the racialised perception of a gangs normalised, it is little surprise there is an over policing of the black community. Black men are bearing the brunt and feeling oppressed as they are surveilled and their movements curtailed. Infringing people’s rights, police intelligence tools and police conduct can often contribute to alienating people and fostering animosity. With stop and search a frequently used policing power and often the first point of contact many young people have with the law, it plays an integral role in the formation of an individual’s attitudes toward the police. Without the confidence and trust of a community, effective community policing is near impracticable. Considering the intrusive and historically contentious nature of stop and search and recent misinformation which seeks to justify calls for an increase in stop and search, through conflating serious violence with gangs, it is timely to explore how being labelled a ‘gang nominal’, placed on the Gangs Matrix and subjected to an enhanced level of policing and multi-agency interventions impacts on individuals.
‍

Responding to the civil unrest that took place in 2011 across London and other cities in the country, the Metropolitan Police Service and former Mayor of London, Boris Johnson, introduced the Gangs Violence Matrix in 2012. The Gangs Matrix is a database, containing the names and personal information of people suspected to be “gang nominals”. Underpinning the database is a set of algorithms that use an established scoring criterion to generate an automated violence ranking for individuals. Each person receives a ranking classification of either red, amber or green. Controversial at the time of its inception, the database was created as an intelligence tool that monitors and manages people identified to be involved in criminal activity. It has continued to gain notoriety over the years with critics highlighting its blatant racial disparity. In Amnesty International UK’s recent report, Metropolitan Police data from October 2017 shows that there are 3,806 people on the Matrix, of which over three quarters (78%) are black. In contrast, according to other Metropolitan Police data only 27% of people accountable for serious youth violence are black.
‍

Critics also have grave concerns about the lack of transparency and oversight around the actual process of how people are added to and removed from the database. Alarmingly, the findings from the Amnesty report reveal that approximately 40% of the people on the Matrix are not recorded as being involved in violent crime yet are subject to enhanced police scrutiny. The seemingly unrestrained sharing of information between statutory agencies, education institutions, potential employers and voluntary and community organisations also poses problems as the gang member label acts as a red flag and results in detrimental consequences for the person that is meant to be receiving ‘support’ to cease criminality. Unfortunately, the overrepresentation of black men in the criminal justice system, as highlighted by The Lammy Review last year, is not a new phenomenon and key to addressing this issue is a need for recognition from the State and wider society that tools such as the Gangs Matrix play a role in preserving the current status quo.