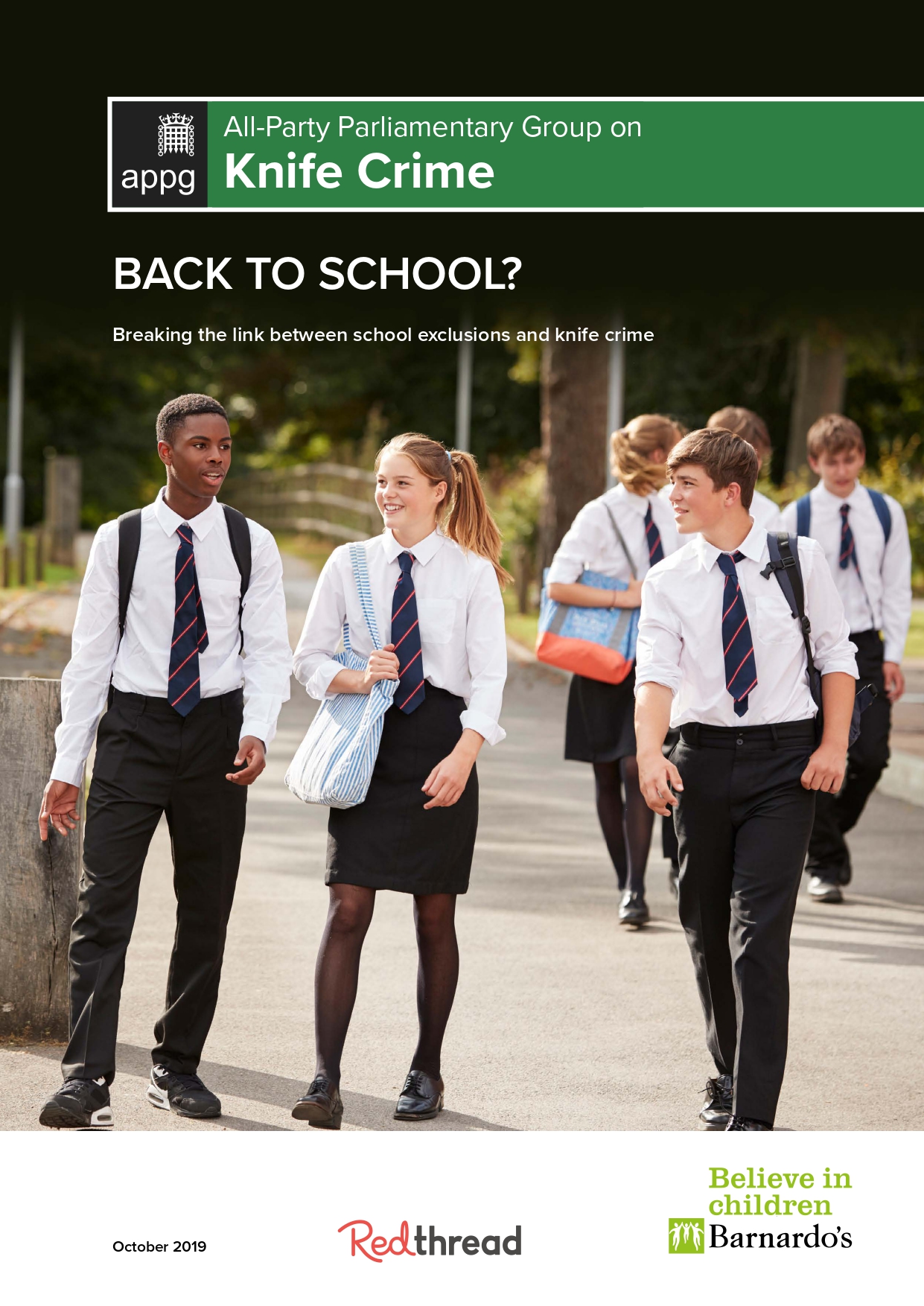 Back to School? Breaking the link between school exclusions and knife crime

There has been a significant rise in both permanent and fixed-period exclusions for English schools over the last five years. In 2017/18 in England there were 7,900 permanent exclusions – a 70 percent increase since 2012/13. School exclusion is more likely to affect certain groups of young people than others. Young people who receive free school meals are about four times more likely to be permanently excluded from school; and young people with special educational needs and disabilities (SEND) are over five times more likely to be excluded permanently. In fact children with SEND make up an alarmingly high percentage of all children who are excluded – 44.9 percent of permanent exclusions and 43.4 percent of fixed-period exclusions in 2017/18.

Exclusion rates are also higher in areas of high social deprivation. Amongst pupils going to school in the 10 percent most deprived areas.

In addition to the official statistics on fixed and permanent exclusions, there remains a concern that the figures are likely to represent only part of the problem. Our investigation suggested that many believe there are still a number of 'unofficial' exclusions where pupils have been 'off rolled' – meaning a child is removed from school without using a permanent exclusion. This problem is difficult to quantify since much remains hidden. The Education Policy Institute, however, published research in April 2019 analyzing exits from secondary schools. This found that for the cohort who took their GCSEs in 2017, 55,309 pupils had been removed from the school roll at least once between year 7 and year 11. This suggests that in that year around 8.1 percent of pupils in the cohort were removed from a school roll at some point for "unexplained" reasons.

Another concern identified through the work of the APPG were the stories of young people who were not officially excluded but have been placed in isolation with very little educational input. One young man told us about his experience of being sat outside an Assistant Headteacher's office watching films on his phone – at the time he was attending only one lesson a week. Officially we do not know how many children and young people are being impacted by these types of arrangements. The Timpson review of school exclusion found examples of both good and poor practice in the use of in-school exclusion units including particularly poor examples of schools where pupils were given work without any supervision or even not given any work to do while subject to "in school" exclusion. Edward Timpson recommended that that Department for Education should review and strengthen guidance on the use of in-school units so they are always used constructively and are supported by good governance. Given evidence received as part of the APPG's investigation we would support such a review.

When asked why school exclusions were rising a large number of contributors highlighted the perverse incentives created by the current accountability and inspection regime. Teachers spoke of a "cliff edge" whereby Headteachers needed to do whatever it took to avoid an inspection result which was anything less than good. A lower inspection result could impact on the ability of schools to recruit teachers and reduce the number of parents who would actively choose the school for their child, impacting on the school's future funding. This could create a downward spiral impacting on the long term ability of the school to deliver the best educational outcomes for its students.

Headteachers reported that Ofsted can appear to give little recognition to work aimed at helping more vulnerable students. They described experiences of Ofsted inspections where work done to improve attendance or help pupils at risk of exclusion had been given only a passing mention in the final report compared to the focus on academic outcomes.

Pupils who spoke about exclusion also talked about experiences where schools seemed overly keen to jump to using exclusion rather than other behavioral interventions. This was particularly so in schools with "zero tolerance" behavioral policies. Recent press reports relating to leaked policy reports from the Department for Education suggest that new Government policy is likely to include an increased focus on school exclusions and "supporting [schools] to create a safe and disciplined school environment". It was not within the remit of the APPG to specifically investigate the effectiveness of current school behaviour policies however if we see more schools adopting stricter approaches to school discipline, we are likely to see greater use of exclusions.