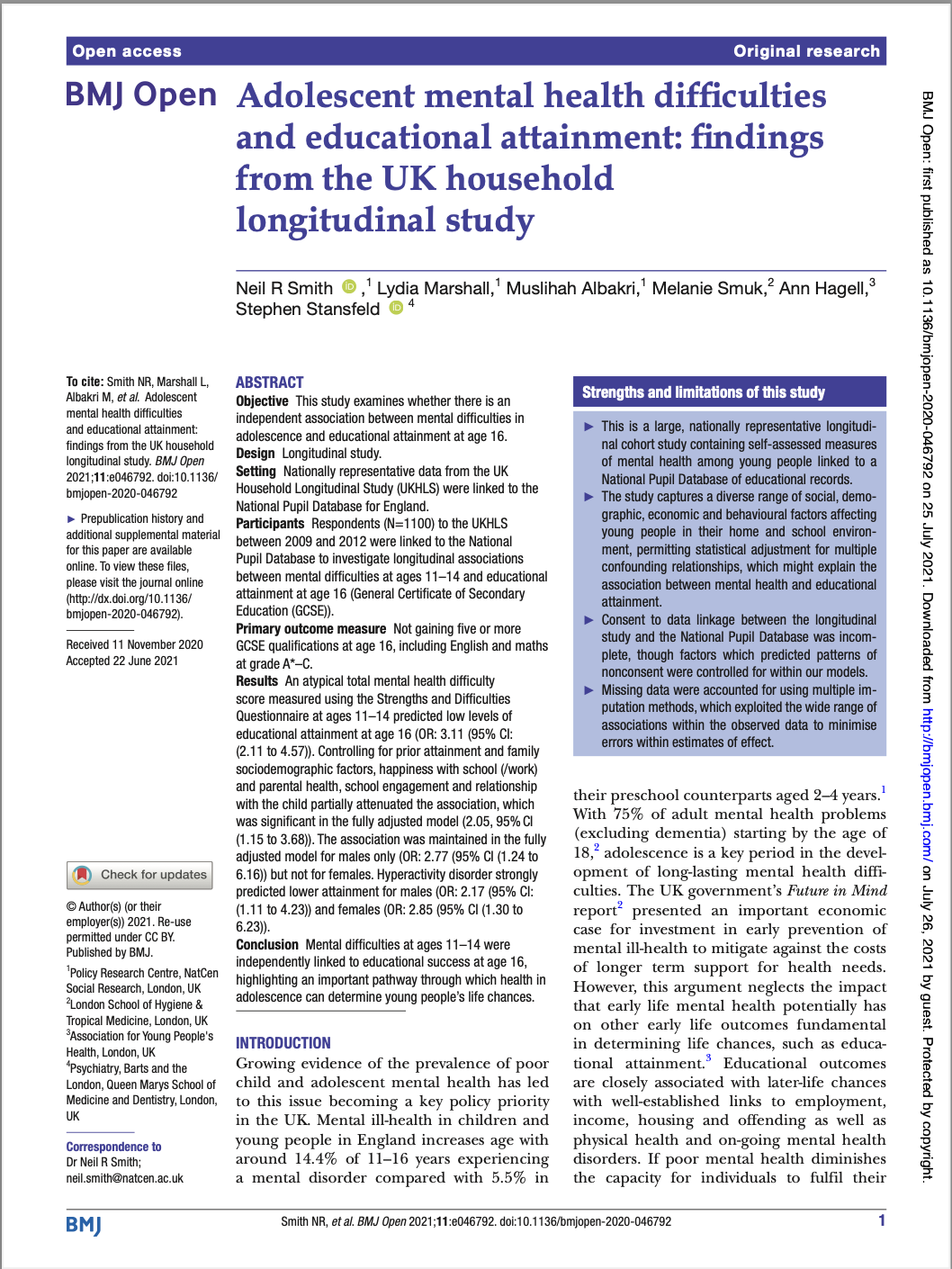 Growing evidence of the prevalence of poor child and adolescent mental health has led to this issue becoming a key policy priority in the UK. Mental ill-health in children and young people in England increases age with around 14.4% of 11–16 years experiencing a mental disorder compared with 5.5% in their preschool counterparts aged 2–4 years.¹ With 75% of adult mental health problems (excluding dementia) starting by the age of 18,² adolescence is a key period in the development of long-lasting mental health difficulties. The UK government’s Future in Mind report² presented an important economic case for investment in early prevention of mental ill-health to mitigate against the costs of longer term support for health needs. However, this argument neglects the impact that early life mental health potentially has on other early life outcomes fundamental in determining life chances, such as educational attainment. Educational outcomes are closely associated with later-life chances with well-established links to employment, income, housing and offending as well as physical health and on-going mental health disorders. If poor mental health diminishes the capacity for individuals to fulfil their academic potential, mental health itself is likely to be a driver of educational inequality and consequent on-going social inequality.
‍

On the other hand, the association between mental health and educational outcomes might not be direct, but rather incorporate the influence of confounding factors. A range of demographic and socioeconomic factors, such as gender, ethnicity, socioeconomic disadvantage and maternal education and parental health,⁴–⁶ have known relationships with educational attainment and must be accounted for when assessing the impact of poor mental health. Similarly, the home environment and specifically parental interest in schooling have been associated with higher attainment,⁷ as have positive environmental ‘school effects’,⁸ whereas lower attainment has been associated with absence from school¹ or poor classroom behaviours.⁹ What is less clear is the extent to which differential exposure to these factors also under- pins disparities in mental health, and whether resulting differences in mental health might influence differences in attainment.International research has demonstrated numerous associations between mental health and educational attainment.¹⁰–¹² The evidence base for England is less well established, which is of particular relevance during a time of policy interest in boosting mental health provision in schools.¹³ There is some evidence of longitudinal associa- tions between psychological distress in early adolescence and achievement at General Certificate of Secondary Education (GCSE) in England.¹⁴ ¹⁵ Similarly, poor mental health between ages 13 and 15 has been shown to be associated with low GCSE attainment and later unemployment,⁹ demonstrating how the effects of poor early life mental health can extend into adulthood.¹⁶ Though many of these findings support the association between mental health and educational outcomes, they are often of low generalisability being based on regional data or nonprobability samples¹⁴ or unable to account for a range of potentially explanatory factors.¹⁵ There appears to be a strengthening of the relationship between adolescent mental health and educational outcomes in recent generations,¹⁷ so there is a pressing need for an up-to- date examination of nationally representative data for England.
‍

Therefore, this study uses a novel and contemporary data linkage between the nationally representative UK Household Longitudinal Study (UKHLS) linked to objectively measured official education records, to test associations between poor mental health and poor educational attainment. The study is significant in estimating the extent to which mental health in early adolescence has an independent association with attainment at age 16 in England in males and females. Robust evidence of a causal relationship between poor mental health and lower academic attainment could be crucial in inspiring invest- ment in researching ‘what works’ in supporting children and adolescents’ mental health. Although schools already appreciate the importance of supporting pupils’ health and well-being,¹⁸ a proven link to academic outcomes could also encourage education and public health policy- makers to invest more in mental health.
‍