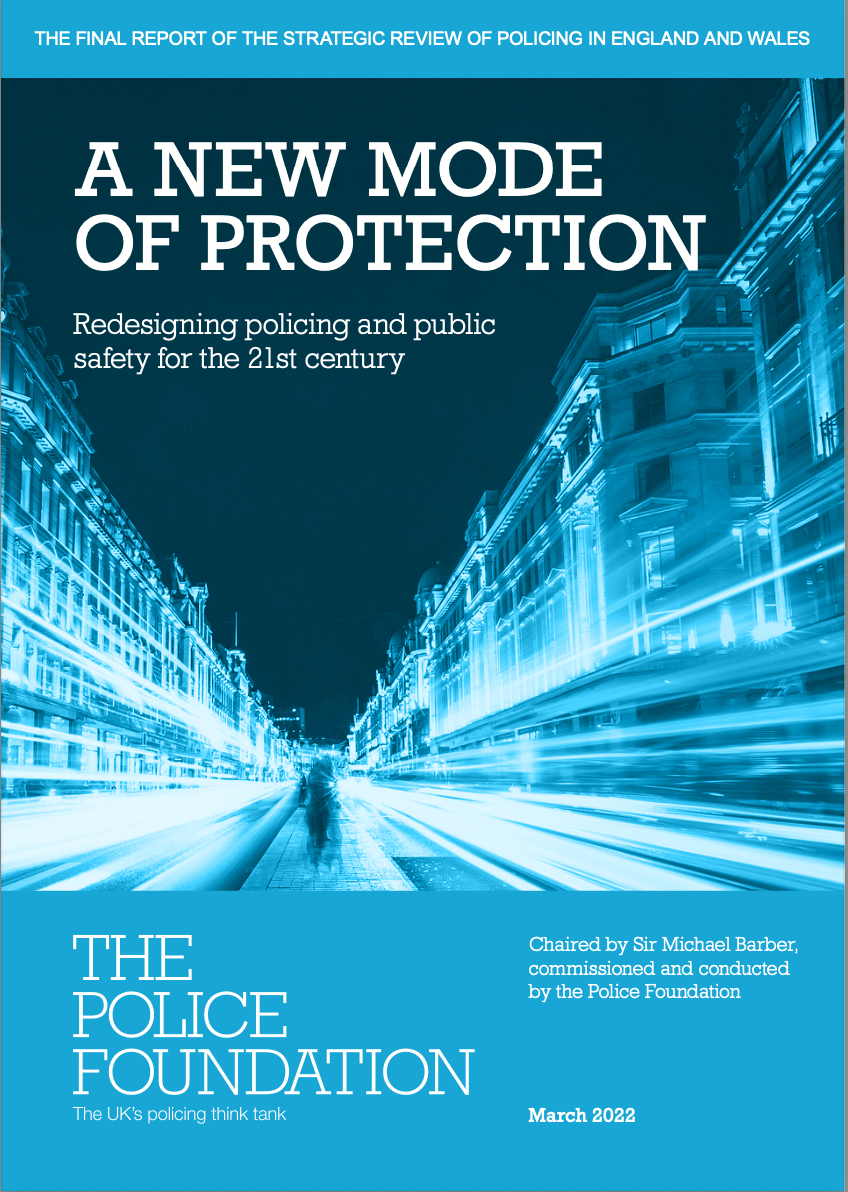 A New Mode of Protection

1. INTRODUCTION
‍
The world around policing is changing as radically as the world in which Sir Robert Peel founded the Metropolitan Police in 1829. It is in that context that the Police Foundation established the Strategic Review of Policing in England and Wales, chaired by Sir Michael Barber. It is the first independent review of policing for many years and is intended to be as influential as the last Royal Commission on the Police in 1962. This final report from the Review is our attempt to describe what kind of police service we will need to address the challenges of the 21st century.
‍

PART I. THE CHALLENGE
‍

2. PUBLIC SAFETY AND SECURITY IN THE 2020s AND 2030s
‍
‍Traditional crime (all crime except fraud and cybercrime) has fallen by 75 per cent since 1995. However, these traditional forms of crime (burglary, car theft, low level assaults and so on) have been replaced by new forms of crime and harm. These have in turn been generated by three transformations.
‍

The technological revolution
‍
‍The technological revolution has created, via the internet, a whole new space in which crime and harm take place. This has transformed the composition of crime. For example, in the year to June 2021 53 per cent of all crime affecting people in England and Wales was just fraud and cybercrime. Despite this we have a largely analogue police service in a digital world. Just 0.6 per cent of frauds that are recorded, and just 0.1 per cent of frauds that take place, result in a charge or summons.

Human activity is transforming the natural environment in a way that poses new risks to public safety. Global warming is leading to more frequent and more intense extreme weather events such as floods, droughts, storms, heat waves and heavy rainfall. By 2050 climate change will force more than 143 million people in sub-Saharan Africa, South Asia and Latin America from their homes, with significant consequences for international migration. In the UK climate change is also generating an increase in political protest and the police increasingly find themselves having to manage the public order implications.

Another form of environmental change is the growing risk of global pandemics. Population growth and agricultural intensification increase the risk of viruses transferring from animals to humans. Poverty, increased population density and the ease of global travel also mean that such viruses can spread very rapidly. The experience of the coronavirus pandemic has shown how highly disruptive such events can be, with significant implications for policing and public safety.

‍We are living through a period of significant social change, characterised in part by the emergence of more complex social needs. For example, there was a 28 per cent increase in mental health related incidents between 2014 and 2018 across 26 forces. To provide another example, police devote around three million ‘investigation hours’ per year to missing persons reports, which is the equivalent of 1,562 full time police officers per year or the same number of police officers required to police the whole of North Yorkshire.

Finally, new forms of social division and tension have emerged creating demands on those charged with keeping the peace. The number of protest events has risen steadily over the last decade, going from 83 in 2007 to 280 in 2016 and the number of protests involving confrontational tactics increased from seven in 2000 to 126 in 2019. The number of hate crimes reported to the police in England and Wales rose by 194 per cent between 2012/13 and 2018/19. Terrorism remains a serious threat and one that is made more complex by the rise of so-called ‘lone actors’.